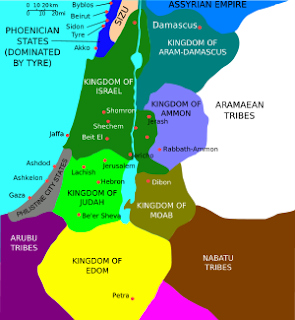 If you're like me you find Jewry a bazaar of the bizarre. The more eclectic here - all three of you - of course know the story of the Jewish rebellion... the fall of Jerusalem and destruction of the Temple by the Roman army in 70 AD. Palestine's Jews were either killed or sold into slavery around the Roman world, thus beginning the great Jewish diaspora. The rest as they say is history....

The kingdom benefited from a power vacuum among the major players of the Middle East at the time (Assyria, Babylon and Egypt) and things went fairly well for about 120 years. But the story takes a turn: upon Solomon's death, his son Rehoboam was anointed king. In the Bible at least, Rehoboam comes across as an insufferable braggart and jerk. As a consequence of his overbearing personality, ten of the twelve Israelite tribes withdrew their allegiance from the Davidic monarchy and started up a kingdom of their own, under a popular leader named Jeroboam, which became known as the Northern Kingdom, or Israel. The southern kingdom was known as Judah and the capital was Jerusalem. The kings of Israel, starting with Jereboam, were a pretty bad collection. The most infamous being King Ahab and his queen, Jezebel.

The split kingdom(s) immediately began fighting one another. Israel was the larger of the two, but Judah had some honest kings, as well as Jerusalem. Furthermore, they could lay claim to the moral high ground. However, upon the emergence of Assyria as the major power of the Middle East in the tenth century BC, both kingdoms found it prudent to become tributaries of the Assyrian emperors. As Judah was being threatened by Israel and their pagan ally, Aram, King Ahaz called upon an exceptionally able Assyrian emperor, Tiglath-Pileser III, for help. On receiving tribute, TP3 immediately invaded Aram and sacked its capital, Damascus. He then turned his attention to Israel and seized some of its lands and cities.

Israel limped along for another ten or twelve years before being invaded by another able Assyrian emperor and was, after 210 years existence, destroyed for good. (722 BC) Many Israelites fled to Judah ahead of the Assyrian army. Those who didn't escape were deported to cities throughout the empire and generally were assimilated into the local population - the so-called "Ten Lost Tribes". However, it seems a substantial number remained behind in the late Kingdom of Israel and in time these became known as Samaritans - after the capital, Samaria. The Samaritans exist to this day (though in drastically reduced numbers) and claim themselves to be the true Israelites - practicing a variegate species of Judaism.

Judah continued as an independent, yet subject, kingdom for another 130 years; however, moral corruption and a succession of bad kings resulted in it being invaded several times by the Chaldean army before finally being destroyed in 588 BC. After 462 years existence, and 134 years after the fall of the Northern Kingdom, Israel/Judah was no longer. The Davidic kingdom ended in violence: Jerusalem was sacked and Solomon's temple leveled. Jews who survived the massacre that followed, with the exception of a few farmers and herdsmen, were transported back to Babylon where Nebuchadnezzar could keep an eye on them; and there they remained for another 70 years. The Samaritans however were left alone and have remained a continuous though declining presence in the Holy Land for two and a half millenia.

As always, the Jews bounced back from this misfortune only to find themselves in the teeth of another one: the Seleucid Kingdom; and after this, the Romans. But that, my friends, is the subject of another day.

Pretending to be ordinary folks who're only defending Jews and Israel. All the while getting paid for their services! This certainly comes as no surprise to those who've taken time to peel back some of the layers of Jewry's grand strategy. They're simply working a time honored plan whereby they target potential problem sites or individuals for special attention - then swarm over them. Wikipedia is one of these. So is Storm Front. YouTube's another....

However, it looks as if the Internet has grown too big, too fast for them to adequately police, thus they've been forced to employ Internet mercenaries to counter criticism of global Israel.

Confucius and the Widow

Confucius and his students were traveling when they came upon the funeral procession of a young man. "What happened?" he asked. "He was killed by a tiger", cried the mourners. "That's terrible!" Confucius said, "Are there many tigers hereabouts?" "Yes, there are!" they replied, and began telling about all the attacks. It seemed everyone knew someone who'd been killed by a tiger. Confucius asked, "If the tigers here are so bad, then why do you stay?" "Because the laws are good", the victim's widow answered.

After the mourners departed, Confucius turned to his students and said, "The widow spoke the truth, bad laws are more to be feared  than man-eating tigers."
Posted by Citizenfitz at 10:50 AM No comments: