The Hitchhiker's Guide to Western Europe 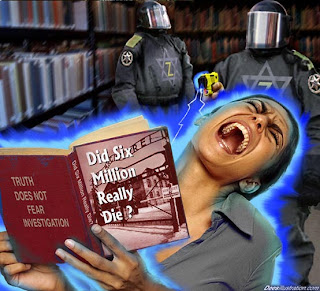 Britain: When traveling in Britain be careful while using public transportation - stay in the same seat.  Changing seats in Britain is viewed as evidence of a crime. Always check what is permissible speech in France, Germany, Austria etc, before opening your mouth. British authorities don't know what's going on! They're not sure of their own laws and will throw you in jail while jabbering endlessly about whether you committed a crime or not. A sure fire way out of any strife is to apologize to the local Jewish community. A donation will be expected.

France: While traveling through France always remember to keep your mouth shut about certain aspects of history. Permitted words do include, " proof... there's... no... Hitler... six... million... killed...  Jews...." But be extremely careful how you put them together. The French are excitable folks! Make sure your math is impeccable: 6,000,000 - 1 = 3 to five years in France. A sure fire way out of trouble is to apologize to the local Jewish community. A donation will be expected.

BeNeLux: The best way to travel through these countries is on tiptoes with your head on a swivel. Speak only in whispers - even with close friends in their living rooms. Always have someone watching your back. You may feel as if you're being watched. You are! So be discreet. Don't give the police any idea you're having doubts about certain aspects of history. A sure fire way for getting out of trouble is to apologize to the local Jewish community. A donation will be expected.

Germany: The best way to travel through Germany is at 500 miles an hour, at 35,000 feet, with a paper bag over your head and your lips sewed shut. Get in and get out as fast as you can. DO NOT THINK! Thinking is a crime in Germany. Don't let anyone observe facial expressions that tell them you're thinking as you will be reported and followed. Never use vocabulizations like umm... err.. or, ahhhh.... They're dead giveaways that you're thinking. German authorities dislike thinkers and throw them, and their lawyers too, into prison. And do not use words like "truth", "integrity" or "justice" at your thought crimes trial as this will only anger them even more. Such language is not permitted in Germany. If you do find yourself in trouble, just say: "Hitler holocausted... gassed... electrocuted... made soap outta... barbecued... lampshaded... boiled in oil... nuked... vaporized... raped... six million Jews". This will favorably impress the judge and shorten your prison sentence. But ya gotta' say it with a straight face. Good luck with that!

A sure fire way outta any strife is to apologize to the local Jewish community.

A donation will be expected....
Posted by Citizenfitz at 12:44 PM