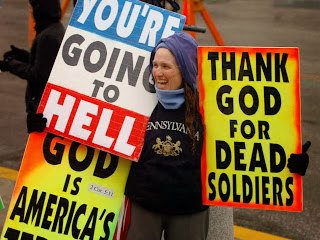 I've been saying it for a while: the Westboro Baptist Church is being used as an agent provocateur. Obviously, their job is to travel around the country and act like idiots for the cameras - in order to demonize Christians and other anti-fag groups.

At the same time they serve to energize liberals - whose energies are flagging due to their realization that Obama duped them - but who get all amped up again at the antics of WBC.

The Jews (no doubt about that!) who exploit the WBC are the same ones funding NAMBLA, PFLAG and all the other fag groups.

Jewry pushes to get Christian kids to fight and die in wars for Israel, then sends the WBC to protest at their funerals.  And for good measure "anti-Americanism" and anti-faggotry get trotted out. In the reaction, American patriotism and faggotry become bedfellows. Very clever....

The Synagogue of Satan always works each side of the street.  In this case there are numerous sides to the street.

At one time WBC were legitimately anti-fag; but the sweet smell of judenpapier turned them into the comic caricatures they are now.  Hillbillies + $$$ =  1 bizarre chemical reaction. 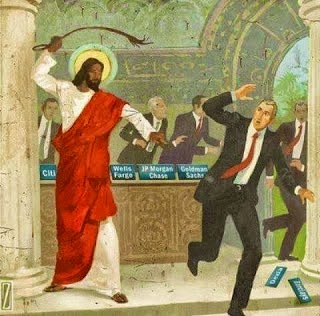 Representative Ron Paul has been going around singing the praises of a return to the gold standard.  In fact gold does still back the dollar, and the Euro, and the Yen..., to some small degree.  It's just that the "dollars" being created now are actually banker's notes, not debt-free government currency as stipulated in the Constitution.  The financiers who own the US and world banking systems conjure these banknotes out of thin air; and every banknote in the world today began its existence as a debt that someone, somewhere contracted when they took out a loan.

Unfortunately for us the financiers who create the principle out of thin air aren't beholden to create the interest too - as the world is soon going to discover.

Basically, the financiers use their dubious paper money to buy up assets that have real value, e.g., real estate, natural resources, farms, factories, people, etc.   For a better appreciation of how money is created and works see: "Five minute money lesson...." http://citizenfitz09.blogspot.com/2012/02/five-minute-money-lesson-or-let-them.html

Ron Paul sees America's financial decline and coming disaster as a problem of fiat money.  Fiat money has value only because a government says it has value.  The problems inherent in such a currency are obvious.  But the real problem facing us today isn’t fiat money per se.  And gold backed dollars won't save us either.  Both can be made to work - when used honestly.

The problem today is *dishonest* money: e.g., a fiat money supply that’s inflated and deflated at will in order to enrich a small handful of money creators.  Precious metals ache to be debased too - by the people who dominate those markets.  As one instructional example, in the last days of the Roman Empire, the coinage had become so debased and taxation so heavy and unjust that downtrodden Italian peasants welcomed the Visigoths as liberators when they invaded Italy.

There is no escaping a dishonest currency.

The problem can ultimately be traced to greed and usury. The greed of the banksters rolling in all that paper money they created.  The greed of their owned political stooges who justify themselves with dubious political axioms. And the greed of the average man, who can be talked into believing snow is black.

Clearly the world today can’t long carry the tremendous weight of its debts.  In the end, every debt must repaid to the very last cent, by either the borrower or the lender. It goes without saying that the banksters have no intention of forgiving our debts.

In conclusion, the greed of everyman rules the world from pole to pole.  From the penthouses to the tenements.  A form of madness that causes men to worship small sheets of essentially valueless paper.  Unfortunately for all of us that debt must be - and will be - repaid.  Down to the last bitter cent.