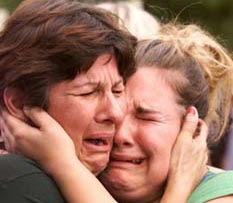 I haven't been able to find much about newspaper failures in the UK, but in the US there have been many thousands of print media layoffs and some big names have ended up bankrupt. TV stations too are feeling the pinch. With the economic downturn and giddy decline of advertising revenues, the chances of these people being hired elsewhere are slim.

But, we shouldn't get too tearful over all the poor, leftward tilting journalists now competing with minorities and illegal aliens - whose causes they'd championed - for shelf stocking jobs.... So long as it paid the bills, they were more than happy advocates of the lie. But now they're reaping what they've sowed:

Some that are in serious trouble: