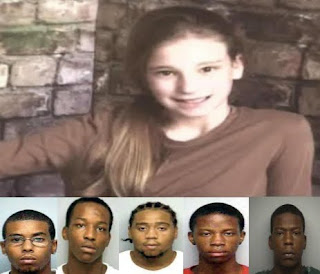 On September 21, 2007, a 12-year old girl named Emily Haddock was home sick from school. Five black males broke into her home and shot her in the head numerous times. Her body was found later that same day by her grandfather. Initially the police described the murder scene as "brutal," but didn't elaborate. Almost immediately a shroud enveloped the case and any further details have been carefully suppressed.

The four black males initially charged are: Sherrod Nicholas Harrison, 19, Michael Graham Currie, 18, Van Roger Smith Jr., 16, and Ryan Jermar White, 18. Another has since been arrested. Despite the fact that all of them are adults, including 16-year old Smith, given the crime, and two have extensive criminal records the media, and local police insist on referring to them all as "teens," in an effort to mitigate what they've done .

Let's talk frankly. Had this been a little black girl, and the killers all white, what do you think we would have been hearing non-stop, 24/7 on the tv; not to mention all the newspapers, magazines....

Some unpleasant facts: negroes in America are about fifty times more likely to commit a crime against a white person than vice versa. They're only 13 percent of the population, but comprise fifty percent of the imprisoned.

Yet the vast number of black on white crimes get carefully swept under the rug, while the relatively few white on black crimes get trumpeted around the world by the msm. Even black crimes somehow get metamorphosed into victimhood by the msm - witness the Jena 6 farce.

Is it all just a coincidence? Not when you recognize *who* own the msm... and what their agenda is.
Posted by Citizenfitz at 9:30 PM