A Brief History of WW3 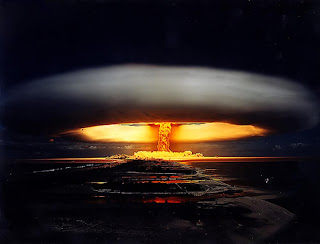 A personal speculation on how the near future might play out:

"The second angel sounded his trumpet, and something like a huge mountain, all ablaze, was thrown into the sea. And a third of the sea turned into blood." Rev. 8:8

Political and financial unrest around the world. Rioting and civil disturbance on a growing scale throughout the industrialized West. Martial Law declared in the US with "temporary" suspension of civil liberties. Random police searches of the populace. Confiscation of privately owned guns under threat of severe penalties. Forced implantation of RFID devices. Widespread Christian resistance to this "Mark of the Beast. "Political assassinations. Many "disappear". American gulag instituted in which criminals, minorities and anyone hostile, or potentially hostile, to the new regime are rounded up, interned, and forced to do hard labor. Revolutionary violence in France, Italy and possibly the UK.

In Europe, the sudden rise of a new, fascistic and well funded political party led by a charismatic leader who touts simplistic plans for fixing Europe's problems. People willingly concede their remaining liberties in exchange for political and financial security. "Temporary" abrogation of constitutional guarantees, or a new European constitution drawn up with individual states retaining a semi-independent status. A great schism rends the Catholic Church. A counterfeit Catholic Church (along the lines of the Catholic Patriotic Church in China) arises which joins with evangelical protestantism and Judaism and is led by state appointed bishops and priests. An anti-pope takes his seat in Rome. The bona fide Church is singled out as reactionary and forced to go underground in the midst of a severe persecution.

Opposition groups arise in the face of these measures, but they are usually false flag operations... solely for the purpose of identifying dissident factions. These are then brutally suppressed.

Russia and China, surprisingly, remain somewhat untouched by these troubles and quickly come to dominate the economies and politics of Europe and Asia. Increasing tension between Russia, China and the New "United States" as the US finds itself in geopolitical eclipse.

Russia pulls an amazing sneak attack on the US - wholly or significantly collapsing the power grid - including the Pentagon's communications and computers network. Simultaneously, they nuke important American and Canadian cities and use nuclear bombs to precipitate tsunamis along America's coastlines. Concurrent use of biological weapons highly likely. China invades Alaska, British Columbia and the northwestern US coast.

Immediately afterwards, Russia launches a three pronged attack into northern, central and southern Europe. Many Muslims accompany their southern flank. Part of this southern army turns south to Israel. Moving very quickly and preceded by nuclear, chemical and biological weapons, the Russians savage Israel and slice through Europe into Germany, committing innumerable atrocities along their lines of march. Various nations are annihilated. "More people will die in one day than in all previous wars combined." Matthias Stormberger

But, on the very threshold of an overwhelming worldwide victory, Russia is defeated by the last remaining Western army and it's army is hotly pursued back to Moscow. Few Russians survive this counterattack. China too, after raining violence and mayhem on Asia, Pacific Islands, and the western US, is defeated.

Those who survive WWIII will wonder if they're the only one's left. "People will have to re-learn reading and writing."

The pace of life will slow down tremendously - to what it was like hundreds of years ago. Europe will find its soul again, return to the Christian Faith and get a king. This king will march his army into the Middle East and destroy what is left of Islam. The world will then enjoy a long period of peace and happiness.