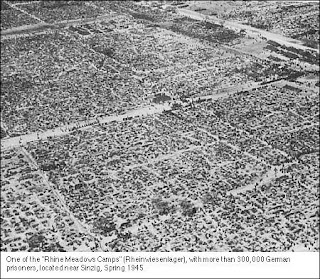 Here's what a REAL death camp looks like. No need for gas or bullets... just herd the prisoners into vast barbed wire enclosures where - without food water, clothing or shelter - they quickly succumb. Odd that the Germans would spend so much time and effort in refining elaborate and expensive mechanisms for mass murder when the cheapest and most efficient method was seized upon by someone as lackluster as Eisenhower.

Ike had a meteoric rise; leapfrogging over hundreds of superior officers and going from Lieutenent Colonel to 4 Star General in only two years! This in spite of the fact that he was well known as a womanizing mediocrity who'd never once lead men in battle.

It helps to have low friends in high places.