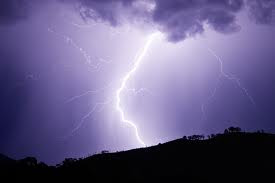 The power of prayer... which we should apply ourselves towards often and with discipline. At the Andersonville Prisoner of War Camp, the only regular source of water for the prisoners was a polluted stream that flowed through the middle of the camp - which made them sick. In desperation, the prisoners came together in prayer - asking God for some relief for their thirst. Not long afterwards, a strange looking cloud over flew the camp from the east, then stopped above it and rained. As the rain was stopping, a lightning bolt of tremendous force lashed out from the cloud, striking the ground in one of the few spots not covered with soldiers. A spring immediately flowed from the crater created by the lightning strike. The spring flows to this day.


"After five days of intermittent rain, on August 13, [1864] the great cloud appeared. Distinctive for its tremendous size and sharply defined shape, it was said to be like a giant mountain in the sky, its color like that of blued gun metal. Approaching from the east, the cloud moved slowly westward until it was directly over the camp. As thousands of men watched with a growing sense of awe, it seemed to stop and hover directly above the bough-covered Dead House, before moving slowly towards the North Gate.

"Even the nervous guards were compelled to stare in wonder as the cloud loomed, over the prison, still and powerful. By this time most of the camp’s crude shelters had been washed away by the rains, and the prisoners had been soaked to skin for days. Now, as the emaciated men stood staring heavenward, for the first time at Andersonville Prison there was complete silence. Even the endless drone of misery from the sick and dying became muted, then seemed to disappear. As the cries of suffering quieted, a soft rain could be heard falling gently upon earth and man.

"Suddenly, there came a thunderous, deafening roar. From men who knew the sound all too well, it was said to be like the explosion of a thousand cannon. It was so powerful that the weaker men standing near the west wall were thrown to the ground. Then, from the heart of the deep blue cloud, came a great, blinding flash – followed nearly immediately by searing bolt of blinding white lightening. It too exploded from the sky, violently striking the earth just within the stockade at a notorious point known as the Dead Line, beyond which no prisoner could pass without being shot. At the place where the fiery lightening struck there was another tremendous explosion, and a stunning eruption of earth and steam filled the air. Instantly, torrents of fresh water gushed from the blasted, broken ground, pouring forth and coursing into the prison. This awesome water was cool and clean, and its flow was to become a permanent thing.

"The thunderous lightning had found the highest point of an underground stream, and the name of Providence Spring emerged nearly as quickly as the waters came forth to the relief of the thousands.

"On that same day the rains stopped, and the stockade walls were soon repaired. No attempts at mass escape were ever made, nor any effort made for the prisoners’ liberation by Union forces, even when Sherman’s army was within 20 miles of Andersonville on their “March to the Sea.” The imprisonment and harsh conditions for thousands of Federals continued through another long winter, and until the war’s end in April of 1865; but throughout that entire time the miracle waters of Providence Spring continued to flow at the rate of about 10 gallons per minute. All who were there knew how rare a thing it was, but among the religious and newly religious in the camp, there was the special knowledge that the prayers of men in the most desperate sort of need had been answered. The awareness and belief that plaintive supplication could be heeded from even such a forsaken and miserable place as Andersonville was infinitely gratifying."