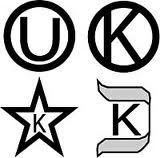 Friends, if you're not Jewish, or if you are but don't keep kosher then why worry about a little thing like kosher labeling on your food? Well, just a second, Bucky! Whether you know it or not, you're paying extra for much/most of the food you buy! It's called the "kosher tax". Companies seek out (or are shaken down by) Orthodox Jews in order to get "kosher certification" for the foods they produce. Even if you're NOT a kosher Jew, you still have to pay. How much?  Well, no one's saying but collectively at least it's a very lucrative, well oiled scheme that makes Gentiles (and non-kosher Jews), without understanding how or why, ante up to keep Orthodox rabbis and their buddies in the kosher clover.

For your Judaeological edification – here's just some of the copious kosher kitsch clogging my cupboards… and your’s:

It took only about ten minutes to dig up these. Check your own cupboards and you'll be amazed at the amount of kosher certification therein, as well as the many kosher certifying groups.  Kosher certification is plainly a bigger racket than even I thought possible. Really big!  Look closely because the kosher symbols are usually small and hard to see and are camouflaged among other erata. Remember, we're not just being overcharged; we're subsidizing the brutalization of the Palestinians (MANY OF WHOM ARE CHRISTIANS) as well as our own nations' subversion when we buy this stuff.

It actually takes less time and effort to name the companies that aren't sticking us with the kosher tax. So, (hats off to T Bone) here are some of them:

Someone brought up the thought that eating kosher certified foods could actually be beneficial: because the Jews might decide to poison the food supply but would hesitate to poison their own foods.  This is a valid point.  Jews of old were sometimes caught trying to poison the wells of the Christians.  No doubt many were never caught.  Assuming the truth of the saying, "There's nothing new under the Sun", and realizing the intrinsic malignity of the synagogue, they'd have no scruples against doing it today.

My own theory on this matter is why bother to poison food when all you need to do is create a food shortage?  Shut off the flow of food to the supermarkets?   Most people only have a few days of food on hand anyway.  But it sometimes takes months for starving people to die. Long months for mobs of  hunger crazed goyim to go on Jew hunting sprees.

A better way sthan this would be to shut down the public water supply.  People start dying of thirst after only three days.  If a water shortage were decided on Jews could get the head's up through the Jewvine and stock up on several weeks worth of water ahead of time.  A contrived failure of the power grid (blamed on Iran of course) and all those electric pumps pushing water through America's faucets would quickly shut down.  This seems to me the likelier scenario.

Thus, in my opinion, you should look around for foods that don't have kosher certification and concentrate on buying them.