The Twelve Stages of a Holocaust Tale 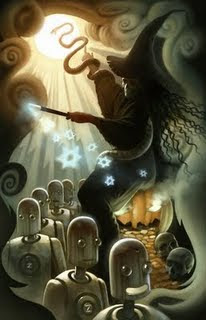 1. The survivor is put in a cattle car filled with hundreds of Jews, but only one poop bucket, and sent to a camp, usually Auschwitz. Many Jews die of suffocation along the way but none from thirst since Jews can go many days without water.

2. The survivor stands in a line, to be chosen either for the gas chamber or the kitchen/orchestra/workshop. Close family members are always put in the gas line. And even though all those under 14 are immediately gassed at Auschwitz, for some reason the survivor is put in the work line.

3. The survivor then comes face to face with "Dr. Death" - Joseph Mengele himself - who decides to spare his life because Mengele had never seen: a dancing Jew, a singing Jew, a Jew with no pimples, or a Jew who said he would do manual labor.

5. However they are still strong enough to work for the Germans as carpenters, electricians, plumbers, rocket scientists, lumberjacks, etc..

6. The survivor has some gold, diamonds or other jewelry which they swallow, defecate and re-swallow in a perpetual cycle; and which he uses to bribe the guards for favors, or to pay for a visit to the camp brothel - where he falls in love.

7. He is taken to the gas chamber, but miraculously escape at the last minute, unbeknownst to the guards. All his friends are killed. He witnesses other horrible sights: babies brain's bashed out by SS brain bashing machines, bears and eagles fighting over Jewish bones, Jewish zombies pulling people back into the burial pits, human flesh cooked and fed to the Jews by SS guards, geysers of Jewish blood erupting out of the ground, guard dogs with poison fangs, Jews with their legs reversed in twisted medical experiments, buckets of guts jumping around on the crematorium floor, people burned alive in the ovens when the gas chambers were too busy....

8. The survivor is then forced to take part in a "death march" which doesn't actually lead to his death. Often he just runs off.

10. The survivor finally escapes for good - right under the guard's noses - by hiding in a latrine. He runs into the forest where he is taken in by Jewish partisans or anti-Nazi wolves.  When the war ends he is rescued by Allied soldiers and weighs only 40-50 pounds. Afterwards, he learns he is the only member of his extended family of 2217 people to survive: and though he has no friends, family, connections or money, he emigrates to America... Canada... Israel.... There, though haunted by his memories and unable to sleep at night due to bad dreams, he prospers and  buys a multinational corporation.

11. For 50-60 years the survivor says nothing about his experiences. Then, suddenly, he can talk of nothing else! He writes a memoir called something like, "Dancing to the Music of my Dreams - A Survivor's Story"and hits the talk show circuit.

12. The survivor has now found peace, and spends the rest of his life telling his incredible story to schoolchildren. But only the youngest ones, of course....