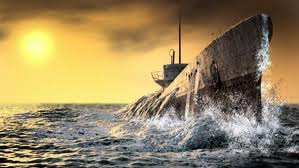 The US Liar in Chief, FDR, had been doing everything in his power to provoke a war with Germany – but Americans weren’t anxious to get into another European war and Hitler wasn’t taking the bait. Even though the US was officially neutral, we were still massively violating the spirit and letter of the Neutrality Acts of the 1930's. Among these were the sending of war materiel to both the UK and the USSR. British merchant convoys were being being escorted by US warships.

Despite these provocations, Hitler ordered his navy to avoid firing on American ships – because he knew that US involvement had been the deciding factor in Germany’s defeat in WWI. Nonetheless, (FDR had at one time been Secretary of the Navy) US warships were laying the groundwork for an incident that would justify a declaration of war.

The USS Greer was convoying British ships back to the UK when it made sonar contact with a German U-Boat. The Greer immediately took aggressive action and steered straight for the Germans, all the while actively “pinging” with it’s sonar. Sonar has two modes: passive and active. Passive sonar picks up sounds from the sea through an underwater microphone and gives the direction – but not the range – from which the sounds came. Active sonar gives the range as well (the sound pulse travels at a known rate of propagation and the interval between when the pulse was created and an echo returned gives the distance to the target). It is a much more aggressive mode for it indicates the target is being sized up for an attack.

The German U-Boat commander having been hunted for three hours decided to send a few torpedoes across the Greer’s bow to warn it off. There is debate about whether the Greer depth charged first and only then was answered by the torpedoes; or whether the sub fired the torpedoes first.

In any event it was a serious act of provocation on the US’ part and in perfect keeping with FDR’s native duplicity.