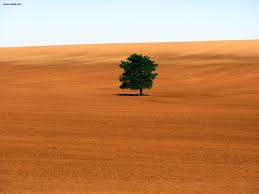 There seemed to be a sheer wall of glass, lightly amber colored, with waves and swirls, like one sees in blown glass from the 1800's. On the other side of the glass was a vast steppe which spread out in low undulating hills towards distant yet clear horizons. The sky was mildly overcast and the grass appeared to have endured a very dry summer: it was short, no more than 8 inches tall, and was yellowed. The only thing that stood out in this epic of desolation was a lone tree, about 250 yards distant.

The tree was very attractive. It was thickly covered with very dark green leaves. The canopy was as broad as it was tall - some twenty five feet.  And the bottom of the canopy, seven feet from the ground, was trimmed flat, as though some grazing animal had expertly cropped the lowest branches up to that height. A deep and pleasant shade lay beneath.

Soon, a group of about twelve people were seen walking across the steppe toward the tree. When they reached it they briefly rested in its shade, then after a minute or two continued on their way.

When they had gone another group of about the same number followed in their path, heading toward the tree. But when this group was about 100 yards from it a terrible storm erupted all around them. The bottom 100 feet of an F5 tornado, accompanied by intense flashes of light, violently churned the earth where the group was standing. Just as quickly as it began it ended. Nothing of the people remained; but nothing else had been harmed despite the great violence of the storm.

The observer was awestruck: "That was ferocious! Who were those people?" he asked no one in particular.
"Those were the rich." an unexpected, quiet voice answered from behind.
"The rich? Then who were the first group?"
"Those were poor people."
The observer replied, "If that's the case with them then it'd better to be a poor person living on the streets of Calcutta!"
"That is quite true."
"The rich should be warned about this! Why hasn't anyone warned them?"
The other answered, "They've been warned many times. See, it is all in the Bible. If people understood this they wouldn't envy the rich, they would pity them."