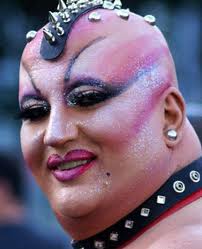 Due to pressure from the American Family Association, and angry calls from people like your's truly, Sears quickly repented and removed the fag literature it had placed for sale on its website (see Citizenfitz: Toto, I've a feeling we're not in Kansas anymore).   http://citizenfitz09.blogspot.com/2012/05/toto-ive-feeling-were-not-in-kansas.html
However, some of the lesbo stuff is still being sold: http://www.sears.com/shc/s/search_10153_12605?keyword=lesbian

The Christians have scored a (minor) victory in the war with the satanic lions (though predictably, none of this was reported in the mainstream media).  However, it's a sure bet Sears will be back in bed with the queers as soon as they think no one's looking.

The larger question is, ehem... "who's behind it all?"  I mean the whole fag agenda being rammed down normal American's throats?  And not just Americans, the same depravity is being pushed throughout the whole western world. Always under the formula of "civil rights".  Those here at Citizenfitz - both of you - of course recognize the scabrous hand of organized Jewry at work: pulling strings from behind the curtain of lies as they always have.  But organized Jewry usually operates in cooperation with organized goyry.  On an issue like "gay rights" we can be certain that they've enlisted the support of big goyry.

Christianity poses a problem for Satan. Satan hates religion in general - but he hates Christianity in particular. Being devotees of the Dark Lord, organized Jewry, and especially the Jewish kabbalists, confirm this hatred for Christianity with their own actions. Their imprecations and ritual murders of Christians are a matter of record. Of course the msm immediately pounces on any such suggestions as "vile antisemitism at best"; but there are mumerous and well documented cases of Jews being caught in the act of human sacrifice.  Ariel Toaff's book "Bloody Passovers" was quickly retired and the remaining copies were bought up. However, like the Protocols of Zion, electronic copies are now available on the Internet free of charge.  You can read it here: http://www.israelshamir.net/BLOODPASSOVER.pdf

Though they conceal it pretty well, Jewry (as distinct from those individual Jews who are normal) hates Christianity. They have from the start! And they consider whatever's bad for Christianity as good for Jews.  It's really that simple. They'll even trample on the Bible if it somehow hurts Christianity.  It truly is a synagogue of Satan. They'll scream their heads off about Catholic priests caught molesting kids - but conveniently ignore the fact that over 90% of these cases involved their pet fags, who'd wormed their way into the priesthood.

The big Jews no doubt approached the big goyim using the argument that fags represent a large and lucrative market share for them to cultivate. Fags are about 2-3% of the general population; and bisexuals possibly double that number. So, there's a lot of money to be had in 4-6% of the population. Then there are all the weak minded, fag loving, liberal types who, though not necessarily anti-Christian themselves, genuflect at the altar of faggotry.

It goes without saying that Christianity, generally speaking, represents an obstacle to these people's world view. So, we have Jewry agit-propping for faggotry on the basis of anti-Christian and anti-White hatred. Jewry however sells their scheme to big goyry on the basis of market shares. The simpletons, some Jews and goyim, are entrained by the illusion.  That's my theory as it stands. However, it's a complicated issue and there are other elements at work besides these, which are not in the scope of a brief article like this.