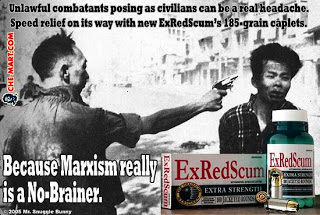 But that hasn't stopped or even slowed the left's love for Che!   No, they've resurrected him as a capitalist tool and high(er) end fashion statement.  Aging hipsters from New York to Caliphonya have been sporting Che's famous image on t-shirts, medallions, watches, mugs, diapers....  His face has been trademarked by the same species of men he once liked to personally execute in Havana's La Cabana prison.  At least one of these a boy of fourteen....

At least they save us the work of identifying them as imbeciles.

Che was captured and summarily executed (much like he himself once did with many of his prisoners)  by the Bolivian Army in 1967.  The revolutionary may die but the revolution is eternal....

When captured this liberal icon was sporting a fashion statement many of his latter day worshipers could identify with: a Rolex watch.

Here are a few more thoughts of this leftist saint:

“The blacks, those magnificent examples of the African race who have conserved their racial purity by a lack of affinity with washing, have seen their patch invaded by a different kind of slave: The Portuguese. These two races now share a common experience, fraught with bickering and squabbling. Discrimination, and poverty unite them in a daily battle for survival but their different attitudes to life separate them completely: the black is indolent and fanciful, he spends his money on frivolity and drink; the European comes from a tradition of working and saving which follows him to this corner of America and drives him to get ahead, even independently, of his own individual aspirations.”

“Mexicans are a rabble of illiterate Indians.”

“Youth must refrain from ungrateful questioning of governmental mandates. Instead they must dedicate themselves to study, work and military service. The very spirit of rebellion is reprehensible.”

“My nostrils dilate while savoring the acrid odor of gunpowder and blood… Crazy with fury I will stain my rifle red while slaughtering any surrendered enemy that falls in my hands! With the deaths of my enemies I prepare my being for the sacred fight and join the triumphant proletariat with a bestial howl!”

“Hatred as the central element of our struggle… Hatred that is intransigent… Hatred so violent that it propels a human being beyond his natural limitations, making him violent and cold- blooded killing machine… We reject any peaceful approach. Violence is inevitable. To establish Socialism rivers of blood must flow. The victory of Socialism is well worth millions of atomic victims!”

“The U.S. is the great enemy of mankind! Against those hyenas there is no option but extermination! If the nuclear missiles had remained (in Cuba) we would have fired them against the heart of the U.S. including New York City!”

Posted by Citizenfitz at 1:42 PM