Dis a faggot! Eat at Chick-fil-A! 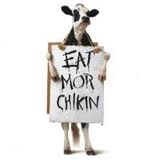 Now, the political arm of global Jewry is lashing out as well:

Some Philadelphia City Councilman named Jim Kenney sent an angry letter to Dan Cathy, saying,  "Take a hike!  There is no place for this type of hate in our great City of Brotherly Love and Sisterly Affection."

Bisexual built for two and famed vote rigger, Hizzoner, Rahm Emanuel, and now the Mayor of Boston, Thomas Menino, have thundered forth: "Woe to ye who call evil evil and good good!"

Here's what you can and should do:

2. Call or email the big, fat Mayor of Boston:

3. Call or email the Jew faced rat of Chicago:

4. Voice your support for Chick-fil-A:
http://www.chick-fil-a.com/

I promise it won't kill you.


PS: Wednesday, August 1 is Chick-fil-A Appreciation Day.   Be there or be square!