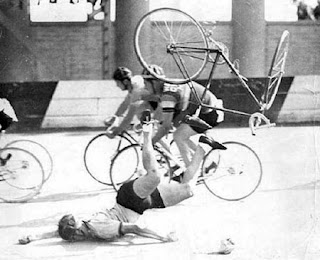 Atheists like to point to Lance Armstrong as one of them.  The jury is still out on that, but it does look like Armstrong is at least strongly agnostic: "If there was a god I'd still have both my nuts."

Pretty ignorant and self absorbed, right?   "I had cancer, so there is no god!  Yeahhh...."  But here it has to be said that you never know where people are going to end up.  At one time even Mr. Fitz was a lukewarm agnostic.   Dr. Bernard Nathanson, an atheistic, pro-abortion Jew and co-founder of NARAL, later had a change of heart, recanted his former pro-abortionism, came out strongly against abortion, and finally became a Catholic.  People's potential for going off Satan's great reservation is endlessly surprising and inspiring.

Yesterday, he was stripped of his world titles, including his incredible seven Tours de France, by the US Anti-Doping Agency.

After a long struggle with a foe more pernicious than even cancer, a US Governmental agency, Armstrong said he would no longer fight the doping accusations by the USADA - which says it will also ban him from future competitive cycling events.

But the Tour de Life ain't over yet for Lance.  Or any of us.  Let's hope this sad disaster will turn into a refreshing liter of reality - which he drinks.