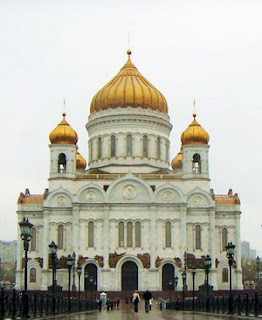 
For the few who haven't heard of them, Pussy Riot is a girl group out of Moscow, Russia who go about staging events designed to garner a maximum amount of attention with a minimum amount of talent.  Except for looking good in tights and short dresses they really have no musical talent at all. They can't play worth a damn, they can't sing and they can't dance. For this they've become world famous.


However, they recently found themselves in a bit of a jam after desecrating Christ the Saviour Cathedral, a beautiful Orthodox church in Moscow reconstructed on the ruins of the old Cathedral, which was destroyed by judaeo-communism in 1931.  The girls invaded the sanctuary and began their usual screeching and spaz dancing, but Moscow police broke up the show within a few minutes and arrested them.  Three of the PR floozies were tried and just a few days ago were sentenced to two years in jail - for hooliganism and inciting religious hatred.  The smirks suddenly fell from their pretty young faces.


All the usual twits... errrhh... folks, are jumping on the Support Pussy Riot bandwagon: Madonna, Sting, Garry Kasparov....  Also, "scientific polls" are being trotted out showing how the whole world supports PR and is against Darth Putin.  Folks, it's called the "bandwagon effect" - and it's an old trick, well known and used by rulers for thousands of years.


Politicians throughout the judaeo-masonic world are waking up, smelling the shekels and signing petitions against the sentence. Germany,  which has a habit of sending people like Ernst Zundel, Germar Rudolf, Horst Mahler, Sylvia Stoltz and anyone else, to prison (for a long time) for the thought crime of questioning the holocaust, weighed in against the "disproportionate and draconian" sentences.  No bottomless irony *there*!


As others have pointed out, all we have to do is imagine what would have happened if PR had invaded a synagogue and desecrated it (as if that's possible).  They'd have been flayed alive by the mainstream media for their "hate crime".  No politicians signing petitions for clemency.  No tears from Madonna, Sting  and Garry Kasparov. No polls showing how the whole world is behind them.... But Satan knows his enemies - and the Synagogue isn't on that list.


Of course, the real story of Pussy Riot is that they are part of a larger story: to demonize Russian President Vladimir Putin in the world's eyes.  It's reasonable to view Pussy Riot as a Mossad/CIA front "group".  They are after all being funded by another Mossad/CIA front, the National Endowment for Democracy, led by one of the Tribe: Carl Gershman.


To his eternal credit, Putin has been giving Israel a hard time. He has been thwarting the insane Eretz Yisrael scheme, their desire for a regime change in Syria and for a war against Iran. It's safe to say Satan's Synagogue is very unhappy with him. Hence, a few talentless tarts have become front page news in the world's "you-know-who" owned media.  It really is all that simple.


Thwarted again by Russia in the PR imbroglio, Jewry has lashed back - by sponsoring another Christian desecration, this time in the Ukraine: http://www.youtube.com/watch?v=861oGyUkmEQ
"Topless" protests like the one in the above video are another old trick used by Jew controlled groups like FEMEN to garner attention for their cause.


Putin is becoming the new Hitler in Jewry's hard little eyes: he's cultivating Russian nationalism.  He strongly supports the Orthodox religion. He's thwarting Israel's agenda in the Middle East.  The zionist occupied governments of the West will soon be calling for more active measures against Russia.  Things are going to get very interesting in the next few years. 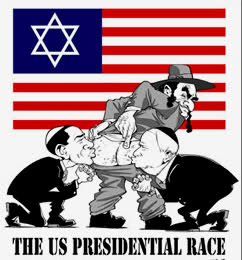