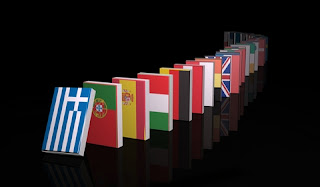 Regulars here - all eight of you - probably don't need to be told this but now's not an especially good time to have your money in a bank.  Cascading cross defaults and all....

The euro's demise has been prognosticated for several years now yet it's still creaking along - albeit in serious decline against the dollar and pound.  But sooner or later all those bad loans the bankers made are going to prove too heavy to support.  BOOM!  It looks for now like Greece will be the first to go.

For the moment the taxpayers of the more prosperous nations - the US and Germany for two - have been doing the heavy lifting for Greece, Ireland and Portugal but it can't continue indefinitely.  The problem of course isn't Greece, Portugal or Ireland; the problem is the fiat money systems of the world: the dollar, euro, franc, pound....  All of them based on a labyrinth of interlocking debts  that must in the end implode.  Monetary systems always implode.  When the Goths invaded Italy they were welcomed by many as saviors... from the Roman tax collectors....