Years ago I learned to be to be circumspect when dealing with "Con"adian Ebayers.  There were often problems with them: lazy packaging, damaged items, false advertising, a general deceptiveness if you will.  In truth I had more problems with Canadian Ebayers than all the others combined - until the day I realized they weren't worth the trouble that came with them - even the ones with good fb numbers....

I'm sure there are lots of decent Canadians still around, but the numerous moral diseases infecting Americans are even worse up there.

Anyone who's googled the story of the recent Toronto Mall shootings should have noticed a glaring omission: in spite of the many articles about it, none had a photo of the killer.  Hmmm....  Of course this sets off an immediate alarm as we all should know by now that if the shooter had been White, his picture would have been pasted all over the global media.

The diligent staff here at Citizenfitz has dug into the matter with its usual ferocity; below are two pictures of the shooter.  Notice how in the first pic, the head of the shooter, Christopher Husbands, is carefully covered up by police so that his face is unseen (and there are probably gloves on his hands too): 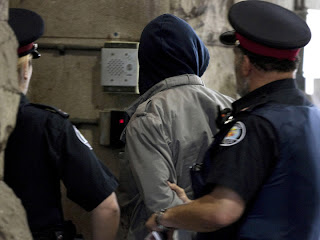 Here's a better view of Husbands, drawn by a courtroom artist: 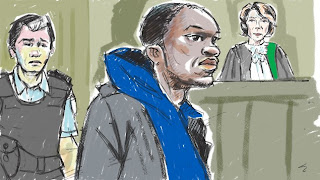 At 23, Husbands was a little too old for the media to call him a "teen".