"It's easier to fool a man than to convince him he's been fooled." Mark Twain 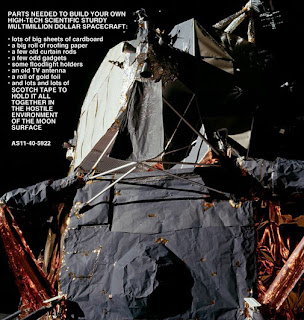 Yup, they flew this pos to the Moon!


I can understand why some people have trouble accepting that America never sent men to the moon: after all, the US government, along with the msm, has been very adamant in their claim that America DID go to the moon - as well as very uncharitable to anyone who holds otherwise. And given that the US government as well as the msm, have never, ever lied, not even one teensy weensy bit, why on Moon would they ever lie about something like that?

Well, I have a theory: MONEY.  Lots of money!  $$$ billions USD were sunk into the Apollo program. A few $$$ thousand here and there into hands that had never held that kind of cash before would gain the unqualified loyalty of a lot of people. Probably most!  $$$ millions more into certain other hands would have an even more salutary effect. Now add to this the able assistance of a group of people whose nefariousness and love of money is legendary, and who also just happen to control large swaths of the US government, as well as the mass media, not to mention banking. Now add to this all the credulous people there are in the world and you're looking at a situation that's ripe with all kinds possibilites!

As P.T. Barnum famously observed, (although he never actually said it) "There's a sucker born every minute." That was in the late 1800's - nowadays there's a sucker born every second. And for every 60 suckers, a slick con man is born.   We also have this bit of wisdom: "A fool and his money are soon parted."  So, what do we have with the Apollo missions of the 60's and 70's?  All the necessary ingredients for an epic hoax: $$$ billions, greed and gullibility.

Some have argued that it'd be impossible to conceal, let alone pull off, a hoax of such magnitude. Not really. There have been lots of hoaxes foisted off on a gullible public: 911, Weapons of Mass Destruction, the Alien Autopsy video, Piltdown man, Java man, the Priory of Sion, the Cardiff Giant, the holocaust, Barack Obama's birth certificate....  There have also been realities that are purported to be hoaxes: the Israelis stealing the organs of people they've killed; and The Protocols of the Learned Elders of Zion, are just two of these.

In a blog like this the problems with the Apollo moon landings are too numerous to go into great detail. I'm not getting a cent for any of this after all.   Suffice it to say that in claims of this sort, if one can find JUST ONE fatal flaw in the proposition, then the remainder need not be addressed. 2 + 2 = 4, or it doesn't.  There are no other options. Likewise, the US sent men to the moon or it didn't. Period. If the moon landing proposition contains a fatal flaw then every other argument for or against it becomes irrelevent. In the Aristotelean sense this is called the Law of the Excluded Middle.

The fatal flaw in the moon landing argument is this: there are no blast craters beneath the various LM's in any of the moon mission photos.

"What?" you might ask. "The government and media lie? That's a tin foil hat conspiracy theory!" Well, my hopeless friend, the blast craters HAVE TO BE THERE. But they're not....

The LM's allegedly arrived on the Moon's surface weighing roughly the equivalent of a fueled up Bell Supercobra helicopter.  If any of you have stood beneath a Bell Helicopter when it descends you know what kind of force the downdraft has.  It can knock you off your feet and will blow any dust beneath it far away.  And this with a rotor disk area of approx. 900 sq. feet... and from many feet up.
The rocket nozzles beneath the LM's were about *20* sq. ft and were at most 2 feet above the moon's very powdery regolith. Furthermore, the exhaust gasses exiting the nozzle would have been approx. 6,000 F.  So... 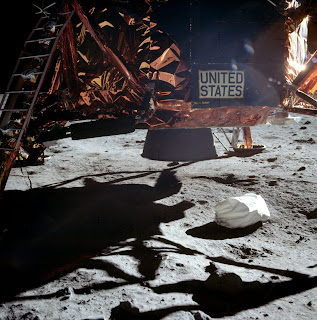 WHERE ARE THE BLACKENED BLAST CRATERS BENEATH THE LM's?

Perhaps they're retired and living the good life in Tel Aviv... at American taxpayers' expense.

There are other problems associated with the imposed narrative: Rocketdyne claiming they lost the plans for the LM's! NASA supposedly "losing" the videos of THE epic event in human history. The fact that no stars are seen in any photos supposedly taken on the Moon.  The fact that the hatches on the LM's are too small to allow a man in a space suit egress or ingress. The paid actors sitting around in "mission control".  The same backgrounds cropping up in shots that were supposedly taken miles apart. Why we can't, even with forty plus years of technological advancement, duplicate today what they were supposedly able to do back in 1969.

Then there are the disappearing/reappearing/disappearing rocks as seen in numerous "Moon" photographs.  The lack of a three to four second radio delay between the astronauts on the "Moon" and mission control on Earth.  The one time Director of NASA, Dan Golden, saying in an interview in 1994 that before we can go to Mars we first need to solve the problem of Van Allen Belt radiation.... The US flag flapping in the Moon's breeze.... The Radio Shack leftovers and cardboard and construction paper construction of the LM's....  You could go on almost forever.


When will you boys be coming back? 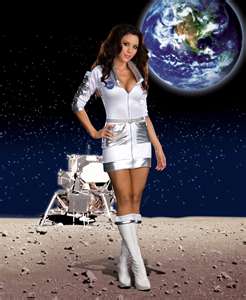 Posted by Citizenfitz at 5:29 AM