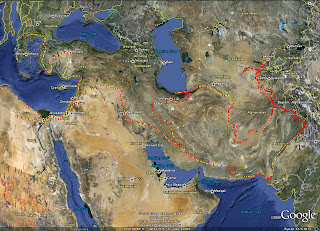 The Great One marched an epic 18,000 miles in his 13 year quest to conquer the lands between him and the Great Sea at the end of the world.  I've highlighted his line of march to and fro.

It's important to remember that it wasn't "330 BC" for him and his army - and opponents - it was now.  Hannibal came 100 years after him and Caesar nearly 200 years later still.  Attila the Hun, so ancient to us, came 800 years after Alexander; and the Mongol invasion of Europe is much closer to our time (775 years ago) than to his time (1570 years prior).  The Black Death was a mere 665 years ago - nearly 1700 years after Alexander.

Each generation is happy to consign its predecessors to the dustbin of history.   Even the beautiful hippie chicks we lusted for back in our day are old women now.   Time is a hard and unforgiving boss.


Good biographical site of Alexander and his times:

Macedonia today.  How did such a sparse land become the seat of one of the world's greatest empires?