Is it really a "tragedy" when libs get themselves killed? 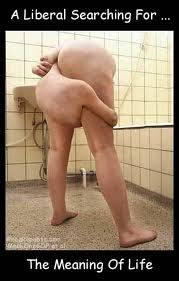 "Liberalism is a mental disorder characterized by delusions of intellectual and moral superiority."


Another foolish liberal gets himself mauled, killed and eaten by a wild animal.  This time in Denali National Park in Alaska.  Richard White, 49 was backpacking *alone* in Grizzly country when he walked to within 50 yards of a large male bear.  The last photos on his camera show the bear looking at him, then coming at him.  Unfortunately, the bear was later killed for only doing its duty - removing another fool from the gene pool.


We see this type of behavior over and over with libs.  It's more than just denial of reality (which is a hallmark by which one can easily recognize them) libs are defiant of reality.  I remember a story some years back about a group of animal rights activists who'd invaded some compound on behalf of the animals therein.  One of the libs reached into an enclosure and patted a lion on the head, which responded by immediately ripping his arm off.


You might reply, "How can you say Richard White was a liberal when you don't know the first damn thing about him?"  Actually I know a lot about him just from this story: he was a fool... and a liberal.  Only a liberal would be stupid enough to approach, alone, unarmed and unprotected, to within fifty yards of a Grizzly bear in the wild.  The bear probably had him in its jaws within five seconds of starting it's charge.  And don't say what a heartless cad  I am, dissing some poor guy who was killed.  HE GOT HIMSELF KILLED, get it?   I can tell you this: it wouldn't have happened to me.  But then I've got a brain and I'm not afraid to use it.


Two winters ago we had a massive snow storm here that paralyzed much of the city.  The electricity was out for tens of thousands of households.  I was driving to the store to pick up some supplies when some raving idiot got irate that I didn't give her the right of way - when I had the right of way.  I saw her turn into a driveway right after we exchanged words.  As I was driving back home I took the same route - and slowed at the scene of the altercation. The car was still in the driveway and,  lo and behold, there on the rear bumper was an Obama sticker!


The real problem facing America is that brainless mopes like White are allowed a voice in the political process.  This, all by itself, proves that America is doomed.  Not to say that the electoral process is legtimate - it isn't - but the fact is there are multitudes of mindless drones walking about who are led to think their opinions actually matter.  The elite see them and can play them from a mile away.  Welcome to the future!