Tales of the holohoax 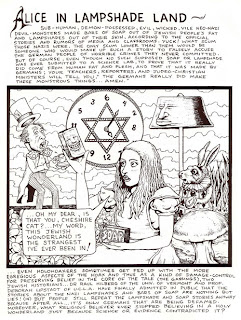 Simon Sheppard and Steven Whittle are two British satirists who once ran a site called, The Heretical Press.  They also ran afoul of British "hate crime" laws.  After escaping from the JUK and flight to the JUS they were arrested and jailed.  Their bid to obtain political asylum in the JUS failed and they were returned to the JUK - and given stiff prison sentences.  Both have since been released; although Sheppard has done further time for his continued thought crimes.  My efforts to assist their request for political asylum were ignored by my "elected representatives".  The "heretical duo" did good work and they deserve our respect and gratitude.

This cartoon, Tales From the Holohoax, is probably their masterpiece; and was the immediate cause of their arrest and imprisonment.  Like so many others: Horst Mahler, Ernst Zundel, Sylvia Stoltz, Germar Rudolf, etc, they learned the hard truth about "freedom of speech".

Posted by Citizenfitz at 6:05 AM