Shoot-out at the DC corral 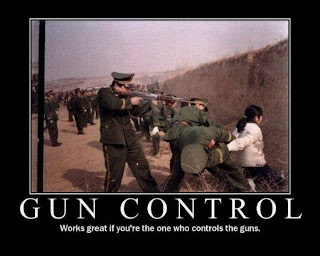 Called and thanked my Senators for rejecting the Manchin-Toomey (Schumer) Amendment.  You should too.

Go here to see how your Senators voted: http://www.senate.gov/legislative/LIS/roll_call_lists/roll_call_vote_cfm.cfm?congress=113&session=1&vote=00097

Inquiring minds will notice the following epic of double-speak:
"Statement of Purpose:  ***To protect Second Amendment rights***, blah blah, blah...."  That's right folks, this back door to gun registration, then confiscation, was being touted as *protecting* the Second Amendment!

In a curious aside, I soon learned that finding out how our senator's voted on the amendment wasn't so easy.  Even in this age of the Internet, none of the major news outlets listed the votes.  Some even had headlines saying, "How did your senator vote?" - yet gave very little information regarding that.

It all smells very Jewish to me.

We here well know this won't be the end of things. Before too long  there'll be another gun massacre... and then another... and another.  Maybe a NY Times headline screaming:  "North Korean terrorists shoot up Black kindergarten!" will finally stampede the cattle into the slaughterhouse - for our own protection of course.

Whatever it takes, bombs... or cakes.   That's how Jewry roles.

I was worried that the NRA had been infiltrated by the Tribe's agents - but it seems, for now at least, our donations there are still justified.
http://home.nra.org/