The sad story of Father Corapi 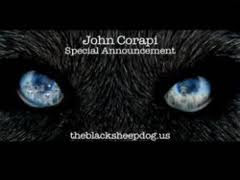 Father John Corapi, the B-29 voiced priest and EWTN star, has been caught up in a personal scandal and has suddenly left his order and resigned his Catholic ministry. His old website, www.fathercorapi.com is closing down, his inventory selling off at 50 cents on the dollar, and Corapi has begun a new "ministry" - "The Black SheepDog".

After credible accusations came to their attention, an investigation by his order, The Society of Our Lady of the Most Holy Trinity (SOLT), learned among other things that he'd been carrying on a long term sexual relationship with a prostitute, was abusing alcohol and other drugs and that he'd acquired a substantial fortune in violation of his vow of poverty. Rather than submit to his superior's order to return to the SOLT mother house, Corapi resigned the priesthood, fled to his home in Montana and re-birthed himself as "The Black Sheepdog". Looking for all the world like the late satanist Anton LaVey (nee Levy) and sporting a black leather Harley Davidson jacket, Corapi has been making YouTube videos that hint at some sort of dark misfortune "for you and me" but which neither admit OR DENY any of the accusations made against him - a sure sign that something rotten is underfoot.

The fomer Father Corapi's new website shows an image of what looks for all the world like a black wolf hungrily eyeing a flock of sheep. A fitting symbol of the Vatican 2 nUcHuRcH. Corapi isn't the first priest to desert his flock to run with the wolves, but his misconduct became too flagrant for even nUcHuRCh leaders to ignore. One could say that at this point the accusations against him are merely that; however, his new look: black leather jacket, shaved head with a dyed goatee, as well as deserting the priesthood, are pretty much iron clad evidence he's gone over to the other side (if he ever really was on the right side) and that Satan is now openly his boss. Watching this sleazy drama unfold we can gain a good understanding of how the devil works. If there's any positive aspect to the whole affair it could only be that at least no accusation of homosexual pederasty has been leveled at Corapi.

Although Corapi has been exposed in his true colors there are reasons for believing that many priests who still remain in good standing are in fact openly serving Satan (much of the Vatican hierarchy as one example). Father Feeney was universally vilified and even "excommunicated" by the same types of Catholics who even now, despite the mountains of evidence of their wreckage, defend Vatican 2, JPII and the former Fr. Ratzinger....

The Church is in dire eclipse... with the liklihood of more and worse still to come. There are many, too many, prophecies that signify these times for thoughtful people to ignore. However, we have it on good authority that the Church will be here to greet Jesus when He returns. Turncoat priests, bishops and popes notwithstanding.