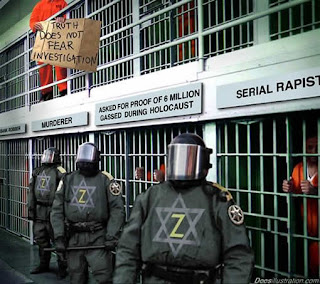 Supposed "freedom of speech" gets an  ugly lesson in Sweden when someone who raises "sensitive" questions about the Jews gets swarmed by Megaphone Jews - most of them no doubt skulking in the US.  Ms. Abrahamsson had better start preparing an apology to the local synagogue.   A donation will be expected....

As always, the little dears have never, ever done anything wrong.  And if you so much as hint otherwise then you're a rabid antisemite!.. and must be dealt with appropriately.  Hey, six million, or whatever, Jews didn't get gassed in the "holocaust" just so some semi-human, goyishe beast in Sweden can express an unapproved opinion.