Was Ike a kike? 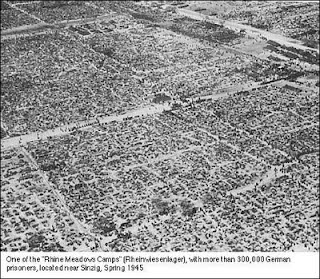 These are what REAL death camps look like - not the ridiculous "holocaust" bs one hears about 24/7.  No need for bullets, gas chambers, ovens, brain bashers, electric swimming pools here. Just herd your helpless prisoners into vast barbed wire enclosures where - without food water, or adequate clothing and shelter - they immediately start dying by the thousands. Odd that the Germans, whom no one ever called stupid or inefficient, should spend so much time and effort refining bizarre, inefficient and expensive ways for killing people - when such a cost effective means for mass murder was seized upon by someone as lackluster as "The Terrible Swedish Jew", Dwight Eisenhower.

Ike had a strange career to say the least: he languished as a major for 16 years before finally making lieutenent colonel. But as war clouds gathered he soon began a rocket-like ascent, leapfrogging over hundreds of superior officers and going from colonel to 5 star general in only three and a half years! This in spite of the fact that he was well known in the interbellum army as a womanizing mediocrity who'd never once led men in battle. Maybe he was just a late bloomer....

Ike's incompetence led directly to the Battle of the Bulge. The Germans saw that his lines were so undermanned they could practically walk through them. A debacle of enormous consequence was prevented only by an immediate and aggressive counterattack by General Patton - whom Ike repaid by starving of gasoline so that his troops wouldn't beat the Soviets to Berlin; and whom he then helped assassinate because Patton was resisting Jewry's postwar plans for Europe.

Whatever else that's said about him, Ike had some very big people pushing for him behind the scenes.  The biggest of these was Jewish stock market speculator, Bernard Baruch - who as Chairman of the War Industries Board under President Woodrow Wilson turned a $7,000,000 USD investment into $200,000,000 - in under 2 years!  At their meeting in 1937 it is said that Eisenhower and Baruch got along very well.

Maybe Ike was a kike after all....