Are you dumb enough yet? 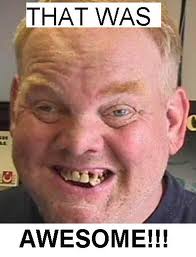 I found this over at Northerntruthseeker's excellent site and it brought back to mind a piece I wanted to do some time back:  FLUORIDE IS BAD FOR YOU!  Fluoride doesn't do squat to stop tooth decay.  In fact it's worse for your teeth than water alone!  It dumbs you down!  It's a known carcinogen!  It's hard on the kidneys too! Unlike calcium or potassium or sodium, our bodies have zero need for fluoride.  Yet our politocos insist on pushing it on us....

The message that fluoride safely prevents tooth decay has been around for decades.  It came from the same "chemicals for better living" people who also told us that smoking cigarettes soothed the throat. But... fluoride is a pollutant.   It's a toxic by-product of copper, iron and aluminum manufacturing.  Check your rat poison and cockroach powder for fluoride, because it's one of the main ingredients.

The problem of how to legally dispose of fluoride was solved in the 1930's when a study (funded by ALCOA) concluded that fluoride helped prevent tooth decay. A successful media campaign, assisted by cooperative politicos, resulted in the good news going out that this miracle chemical, when added to water, would give everyone bright healthy teeth and smiles.

The chlorine that's pumped into us via the water we drink will at least evaporate if we let the water sit out for a while.  Not fluoride.  Fluoride enters your body and sequesters in fat cells.  And from there it seeps out into the rest of your body... poisoning everything along the way.

The question we may want to ask ourselves is this: why in hell would  huge, multinational conglomerates, abetted by compliant politicos, want us dumb and glowing in the dark?

NEW YORK, July 24, 2012 /PRNewswire via COMTEX/ -- Harvard University researchers' review of fluoride/brain studies concludes "our results support the possibility of adverse effects of fluoride exposures on children's neurodevelopment." It was published online July 20 in Environmental Health Perspectives, a US National Institute of Environmental Health Sciences' journal (1), reports the NYS Coalition Opposed to Fluoridation, Inc. (NYSCOF)
"The children in high fluoride areas had significantly lower IQ than those who lived in low fluoride areas," write Choi et al.
Further, the EPA says fluoride is a chemical "with substantial evidence of developmental neurotoxicity."
Fluoride (fluosilicic acid) is added to US water supplies at approximately 1 part per million attempting to reduce tooth decay.
Water was the only fluoride source in the studies reviewed and was based on high water fluoride levels. However, they point out research by Ding (2011) suggested that low water fluoride levels had significant negative associations with children's intelligence.
Choi et al. write, "Although fluoride may cause neurotoxicity in animal models and acute fluoride poisoning causes neurotoxicity in adults, very little is known of its effects on children's neurodevelopment. They recommend more brain/fluoride research on children and at individual-level doses.
"It's senseless to keep subjecting our children to this ongoing fluoridation experiment to satisfy the political agenda of special-interest groups," says attorney Paul Beeber, NYSCOF President. "Even if fluoridation reduced cavities, is tooth health more important than brain health? It's time to put politics aside and stop artificial fluoridation everywhere," says Beeber.
After reviewing fluoride toxicological data, the NRC reported in 2006, "It's apparent that fluorides have the ability to interfere with the functions of the brain."
Choi's team writes, "Fluoride readily crosses the placenta. Fluoride exposure to the developing brain, which is much more susceptible to injury caused by toxicants than is the mature brain, may possibly lead to damage of a permanent nature."
Fluoride accumulates in the body. Even low doses are harmful to babies, the thyroid, kidney patients and heavy water-drinkers. There are even doubts about fluoridation's effectiveness (2). New York City Legislation is pending to stop fluoridation. Many communities have already stopped.
Infant formula when mixed with fluoridated water delivers 100-200 times more fluoride than breastmilk. (3)
More information on fluoride's impact on the brain is here.
Contact: Paul Beeber, JD, 516-433-8882 nyscof@aol.com
http://www.fluoridation.webs.com
http://www.FluorideAction.Net
SOURCE NYS Coalition Opposed to Fluoridation, Inc.
Copyright (C) 2012 PR Newswire. All rights reserved
Posted by Citizenfitz at 1:37 PM