The Jewish war on freedom of speech 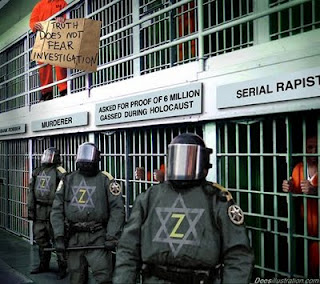 The Tribe is nervous.... They're getting clobbered in the propaganda war on America's campuses, like the University of California, and must resort to pulling strings at the political level to cover their assets. Recently the California Assembly passed a (non-binding... for now) resolution (HR35) authored by Linda Halderman, R-Fresno and Bonnie Lowenthal, D-Long Beach, which equates criticism of Israel with "hate speech": http://freedom4um.com/cgi-bin/readart.cgi?ArtNum=149331

This confused, child-like bit of feminonsense implies that Muslims are the ones behind the protests, while at the same time accusing the participants of "pretending to be Palestinians". Surprised by the vehement reaction to the resolution, the UC has backed off from its initial support... for now.  However, we've witnessed other such attempts by the Tribe in its back door war against the idea of freedom of speech:

*Question the imposed "holocaust" narrative and go to prison; or, If you can't beat them, jail them!: http://www.presstv.ir/detail/170388.html

*Drunken woman sentenced to 21 weeks in jail for anti-minority tirade on a subway: http://www.dailymail.co.uk/news/article-2151576/Woman-jailed-21-weeks-racist-Tube-rant-seen-YouTube.html

*Criticize ZOG and find yourself on the next AMTRAK to rubber room city: http://www.businessinsider.com/former-marine-brandon-raub-is-being-held-in-a-psychiatric-ward-over-facebook-posts-about-911-2012-8

While Jewry feels perfectly entitled to criticize, demonize, mock and ridicule anyone they dislike, they become very defensive if anyone dares to return the favor.