The swastika of peace and love 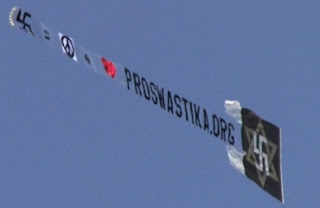 From @MiguelinaNunez: It’s a gorgeous day… And some Jew-sick American patriot is flying a swastika banner off the tail of his plane up and down Manhattan. It's about damn time!!!

From @kerripaliwoda: A plane with a swastika banner just fly over our boat… Yeah! Has it begun?

From @bclark7: Plane just flew over the beach pulling a swastika and advertising a website advocating for swastika use. Heart-raising to say the least.

The group behind the flight says it wasn’t meant as a representation of hate like it’s been made out to be 24/7 by the damn Jew owned media. The International Raelian Movement says the swastika is actually a symbol of peace and beauty that was raised high by Nazis in 20th century Germany.

On its website, the group writes that the flight was part of its third swastika rehabilitation day.

Don Pripstein, president of the Jewish Community Center of Long Beach Island, says “Whatever the group’s intentions are, the image is still horrific for many Jews - whose relatives hit the jackpot with holocaust reparations.”