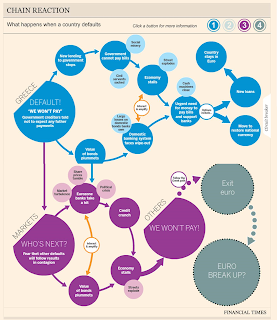 Although the mainstream media has largely downplayed or even ignored the troubling news from Greece: the growing problem of hunger, soup lines, the rising suicide rate, the huge unemployment rate, the descent into poverty rate...  Still, very helpful information can be gleaned from the Internet... and interpreting the signs of the times.

Sadly, Greece is circling the drain. Even sadder, before long it's going to go down the drain. It's inevitable. And this in spite of $400 billion transfused into its dying economy courtesy of German, French and American taxpayers. But all this bailout money has only postponed the day of reckoning for the Greeks - ensuring that when the DOR does finally arrive the impact will be all the more brutal for the delay. The Greek bailouts also ensure that the taxpayers of the world are being made poorer too, in ways they don't see... yet.  In any event, even though we can all kiss those bailout billions goodbye - rest assured the taxman never will.
http://www.businessinsider.com/henry-blodget-guess-whos-paying-for-that-greece-bailout-thats-right-you-2010-5

If nature abhors a vacuum it abhors a bad debt to income ratio even more. Briefly, the Greeks, like so many others, were living larger than their means. They seem to have been especially profligate with their money, with even low income Greeks buying expensive things they couldn't rationally justify. The credit card mindset gone viral!

The government too caught the bug: public spending nearly tripled between 2000 and 2008. Taxes went up greatly too, this caused widespread tax evasion. When the financial fart hit the world in 2008 Greece was in closest proximity. Today Greece's debt to gross domestic product ratio is about 155%.  In other words for every dollar they have, they owe $1.55!  And this in spite of the enormous bailouts - and the fact that many of their lenders have agreed to drop their interest rates.
http://www.tradingeconomics.com/greece/government-debt-to-gdp

Although Greece has as of this writing received over 320,000,000,000 Euros in bailout money the average Greek is getting poorer, and hungrier, with each passing day. Their bad credit rating has come home with a vengeance and it now costs the government 29% to borrow against their ten year bonds. Because European suppliers are nervous about extending credit to Greek buyers, essentials like food, medicines and the raw materials with which to sustain the infrastructure are in short(er) supply. This will only get worse over time.
http://www.nytimes.com/2013/04/18/world/europe/more-children-in-greece-start-to-go-hungry.html?hp&_r=2&

Greek leaders have pledged to slash their budget deficit through a programme of various austerity measures, spending cuts, tax reforms and selling off public assets. Here I don't think it's necessary to point out that these "leaders" are today, as they were yesterday, the handpicked puppets of the very banksters who lured Greeks into their current morass.
http://www.truth-out.org/opinion/item/18195-the-tragedy-of-greek-austerity-continues

Logically one cannot borrow his way out of debt any more than he can fight his way out of a battle. So ultimately things are going to have to go into crisis mode. And when they do, the banksters will be there with a solution. One that was in the plans all along....
http://ethics.wikia.com/wiki/Problem_Reaction_Solution
http://www.propagandamatrix.com/diocletian.html

There's been some chatter about Greece exiting the Euro and returning to the drachma but I don't think the banksters will allow that, although they're probably sick and tired of the headache Greece has become for them. It essentially involves Greece defaulting on its debts - something the banksters would not find amusing. Furthermore, the  banksters have invested an enormous amount of time and capital in creating the Euro and getting it up and running.  Allowing its repudiation at this point would fuel an unwelcome precedent in the minds of others harboring their own doubts about the Euro's viability.

It wouldn't work for Greece to exit the Euro either, at least in the short run.  A return to the drachma would cause serious problems: namely it would soon begin to depreciate. This along with the  inability to borrow would make it difficult for Greece to get the money it needs to function.  The government would then be forced to print more drachmas in order to pay its bills - leading into an inflationary spiral. Coupled to a stagnating economy this would almost certainly cause a run on the banks as people try to withdraw whatever's left of their life savings to buy food.
http://blog.findtheflaw.com/topics/if-greece-goes-back-to-the-drachma/

Insightful readers of Citizenfitz recognize the futility of borrowing to stave off foreclosure. So, what's really going on? Well, in my opinion, what's really going on is the banksters are busy preparing a world wide domino event. Of course, in a domino event the dominoes must be toppled at the *proper* time - and only after all the pieces are carefully laid in place. However, the banksters got greedy in Greece and things have gotten a little dicier than they'd have liked. Greece is a swaying domino threatening to fall before it's appointed time and ruin the bankster's carefully laid plans. So, at all costs Greece must be kept from toppling over into others... for now....

Those of us who live elsewhere should be taking a good look at what's going on in Greece - because it's the small start of a huge avalanche that's coming the world's way: unemployment, cold, hunger, disease, anger, brown outs, political extremism... wars. Here in the US things will definitely be worse than in Greece. We won't have American taxpayers helping to bail us out!

It's going to get ugly.  There are lots of idiots here with guns. Not to mention the countless millions of Americans who depend on gubment handouts in order to stay afloat; and this when times are good!

Imagine all that would happen if things go bad.  You'll probably be right on the money....