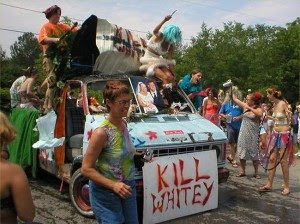 The multi-culturalist, being a liberal, has so completely subscribed to a nexus of false premises that admitting he or she is wrong is the same as admitting he/she is a total freaking retard. They'd rather be burned at the stake than have to admit that. Also, by spouting their mindless, multicultural mantra they get a lot of favorable attention they'd never get from sitting quietly in their own rooms, minding their own business and instead of trying to reform the world, reforming what's wrong with themselves.


"Offer the Multicult Moron $500 (to walk down the street at night in a certain neighborhood you know about in your city) I can guarantee you he’ll blow you off. Ask him to give you $10 to walk through a mostly White neighborhood. Fuggitaboutit. They all know the deal. Being near blacks risks a bullet to the head or gang-raped, [with] a far less chance in a predominately White part of town...."