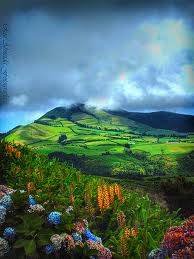 The witness looked down on what appeared to be an immense national park.  The park was square shaped - and so large it seemed to encompass the four corners of the world.  But in one corner an odd looking extension curved away, making the park look something like a square caption balloon.

The witness began to descend and as he descended he saw a very pleasant land of subtropical forests, meadows, flowers, lakes and rivers.  Descending further he could make out multitudes of creatures of every sort. Some of a type never before seen.  Some were large, some small, some in between. All were grazing, lazing or playing - depending on their type.  The entire scene gave the impression of beauty, peace and contentment.

When his feet touched ground the witness saw that some of the creatures, which looked somewhat like foxes, were talking to the other creatures and stirring them up to go explore the curved extension at the corner of the park. Some of the larger creatures thought this sounded good and began to follow them. They were led on with promises, words and laughter. Many of the smaller creatures followed too, though it appeared this was merely their habit. Eventually, most of the creatures in the park were headed toward the corner.

As the swell of creatures began to enter the mouth of the extension, the fox-like creatures, who had moved behind them, began barking and biting at their heels as if to hurry them along. The extension began to close in, funnel-like, with high, stockyard style fences lining both perimeters.  Soon the creatures were tightly compacted and carried along by the force of their own momentum as well as those pushing them from behind.  There was no possibility of turning back at this point and the fox-like creatures were now snarling and viciously biting them.

As the curved path straightened out before them, the streaming river of creatures saw a large building from which came the sounds of a great cacophony.  Atop the stockyard fences other types of creatures were furiously whipping and beating any that came near them.  These creatures received colorful little ribbons - of which they were extremely proud - rewarding them for their violence against the others.

But none of the vicious creatures realized that once the others had been herded into the building they too would follow.