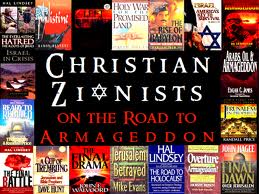 "Pull on the head and the ass follows."  Yiddish proverb

"My opinion of Christian Zionists?  They're scum. But don't tell them that. We need all the useful idiots we can get right now.” Benjamin, "Bibi" Netanyahu


For both of you who don't yet know of him, John Hagee is a big, fat TV preacher. He's the founder and senior pastor of Cornerstone Church, a so-called "mega-church", in San Antonio, Texas.

In spite of his blubbery, oddly worm like lips, Hagee's a very good singer - and he struck gold singing the praises of Israel!  In fact he even started a ministry, "Christians United for Israel" in which he ceaselessly shills for that vicious little provocateur:
http://www.cufi.org/site/PageServer

He also wrote a book: In Defense of Israel, in which he decries, "the vicious abuse of the Jewish people...."   There's more: "Jesus never claimed to be the Messiah...." WTH?

While he's done some good and has showed flashes of courage, Hagee's revealed that he's actually working for Satan.  In the following video blurb for In Defense of Israel, Hagee throws Jesus under the wheels of the Jewish bus by stating that the Jews aren't responsible for "denying Christ" because Jesus, "never claimed, by word or deed, to be the Messiah.":
http://vimeo.com/33784563

In, In Defense of Israel, Hagee holds King Herod, Caiphas and Governor Pontius Pilate responsible for Jesus' crucifixion....  Au contraire!  It was the Sanhedrin that decreed death for Jesus and hauled Him before Pilate (beating Him all along the way). And  Pilate tried repeatedly to free Him - but was howled down by a rioting Jewish mob, whipped into a frenzy by the rabbis.

Jesus implied He was the Messiah (Christ) many times; and explicitly claimed it several times:

John 4:25-26: "The woman saith unto him, I know that Messias cometh, which is called Christ: when he is come, he will tell us all things. Jesus saith unto her, I that speak unto thee am he."

Mar 14:61-63  "But he held his peace, and answered nothing. Again the high priest asked him, 'Art thou the Christ, the Son of the Blessed?'  And Jesus said, 'I am: and ye shall see the Son of man sitting on the right hand of power, and coming in the clouds of heaven.'  Then the high priest rent his clothes, saying, 'What need we any further witnesses?'"

Luk 23:1-3: "And the whole multitude of them arose, and led him unto Pilate.  And they began to accuse him, saying, 'We found this man perverting the nation, and forbidding to give tribute to Caesar, saying that he himself is Christ a King.'  And Pilate asked him, 'Art thou the King of the Jews?' And He answered him and said, 'Thou sayest it.'"

Jhn 9:22: "Thus spoke his parents, because they feared the Jews: for the Jews had agreed already, that if any man did confess that [Jesus] was Christ, he should be put out of the synagogue."

Jhn 10:24-26: "Then came the Jews round about him, and said unto Him, 'How long dost thou make us to doubt? If thou be the Christ, tell us plainly.'  Jesus answered them, 'I told you, and ye believed not.  The works that I do in my Father's name, they bear witness of me.  But ye believe not, because ye are not of my flock.'"

There are other such passages.  The point is that Jesus gave testimony of Himself - by word AND deed - countless times. But the Jews were unwilling to listen to Him any more than the other prophets sent to them - most of whom they killed, or tried to kill.

In their blind hatred of Him, the Jews unwittingly gave honest testimony to Jesus; then - and now.

However, worse even than the perfidious Jews are the bad Christians.  St. Macarius put these in the bottom most pit of hell.

Nobody seemed to know where John called home
Just tumbled like a weed into San Anton...
He couldn't talk enough and he wasn't shy
He'd just reach for your money and then say "bye" - Big John

Somebody said he came down from above
Where he saw the light!  Flashing: "Mammon is love."
And a crashin' blow from God's right hand
Sent another gabby preacher into TV Land - Big John
(Big John Big John) Big Fat John (Big John)

Then came the day when John went live
And a camera lens cracked from the force of his jive
Sinners were prayin' hard and their hearts beat fast
And everybody worried that they'd breathed their last, 'cept John

Through the screams and the wails walked the man from hell
A local televangelist they all knew knew well
He grabbed a saggin' sinner and gave out with a groan
And that human barrel cactus thought, "Let's give 'em a show."  - Big John
(Big John Big John) Big Fat John (Big John)

And with all of his strength he gave a mighty shove
And the sinner yelled out, "I see a light from above!"
Then a thousand folks scrambled at the altar call
And when he said, "Israel!" they began to fall - for Big John

With piles of money, some Jews soon appeared
And they said, "Big John, we like what we hear!"
And so, the mantra "Israel" soon was heard
Hard on the heels of every other word of Big John
(Big John Big John) Big Fat John (Big John)