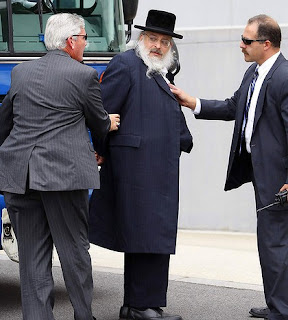 Bernard Bergman... Orthodox Rabbi who owned a network of nursing homes.  Convicted of Medicaid and tax fraud in 1976.  Fined $2,500,000 and sentenced to a year in a New York State cooler.

Rabbi Avraham David, aka Earl Seth David... masterminded what may have been the largest immigration fraud scheme in US history.  David ran an immigration mill out of his Manhattan law office, filing some 25 thousand fraudulent immigration applications and charging fees of as much as $30,000. David created phony sponsors for the  illegals, providing phony pay stubs, phony employer tax return information, phony letters of reference from prior employers and phony written offers of employment. He fled to Toronto Canada when he learned the feds were on to him and re-invented himself there as "Rabbi Avraham", even authoring a book: “Code of the Heart,” a treatise on Hebrew numerology that purports to reveal predictions of future events in the Bible based on a hidden code.  In spite of this, after four years on the run, David was arrested and exradited back to the US. He pleaded guilty and faces up to eight years in federal cage.  Also ordered to forfeit $2.5 million in proceeds.

Rabbi Elazar Abuchatzeira... was one of Israel's leading kabbalists, and appeared in a list of the country's wealthiest people, with an estimated worth of $80 million USD (2011). He acquired much of this fortune by charging Jews for "blessings" - few, if any, of which materialized.  Abuchatzeira was stabbed to death by another rabbi, and one time follower, who was displeased with the marital advice Abuchatzeira had given him. Under investigation for fraud in the US at the time of his death. Abuchatzeira also settled a tax fraud case in Israel for 20 million shekels (approx. $5,000,000 USD) – even though the true amount owed is said to be much greater.

Rabbi Leib Glanz... one time chaplain for New York City's jails, Glanz arranged a lavish jail house bar mitzvah celebration for a wealthy inmate’s son (convicted swindler Tuvia Stern). Charged, along with his brother, of theft and conspiracy in a $220,000 USD federal rent subsidies scam that went on for over 15 years, a case that city authorities called the largest individual case of tenant fraud they'd ever investigated. Awaiting trial.

Eliyahu Bakshi-Doron... former Sephardi Chief Rabbi of Israel, awaiting indictment for his part in a fraud in which 1,500 members of the IDF and police force received false certificates of rabbinic ordination - entitling them to an extra NIS 2,000 - 4,000 (approx. $500 - $1,000 USD) a month in wages.

Rabbi Meshulam Rothschild... Brooklyn rabbi busted by the ATF for scamming New York out of nearly $200,000 USD a week in unpaid cigarette taxes. Rothschild is accused of purchasing untaxed cigarettes in Virginia, then peddling them in Chinatown and elsewhere in New York City. It's estimated Rothschild moved about 3,600 cartons a week. The state lost about $50 in tax on each contraband carton. Awaiting trial.

Rabbi Marvin Berkowitz... mastermind of a scheme that used the stolen identities of dead people and federal inmates to file for millions of dollars in phony tax refunds. Prosecutors said Berkowitz directed a ring that fraudulently collected at least $54,000,000 USD in tax refunds from the Internal Revenue Service as well as various states.  Berkowitz then transferred the funds to bank accounts in Israel. In a story with a now familiar ring, Berkowitz fled to Israel soon after his indictment. He lived in Jerusalem for six years before Israeli officials finally returned him to the U.S. to face the charges. He plead guilty in federal court to mail fraud and conspiracy charges and was sentenced to 18 years and 4 months in prison. Seven others, including two of Berkowitz's sons and a son-in-law, were also convicted.

Rabbi Benjamin Herbst... falsified deeds and forged signatures to fraudulently obtain title to properties he didn't own. When a property owner died in NYC, Herbst would spring into action: forging the signature of the deceased onto a phony deed, then placing a lien on the property.  Herbst would then take out a loan - using the property as equity. The company making the loan was controlled by Herbst.... He once attempted to steal an entire office building using this formula. Though the title fraud may have been apparent, the rightful property owner quickly discovered that Herbst's encyclopedic knowledge of New York real estate law made it painfully expensive for them to try to get it back: Herbst's lien on the property blighted it in the eyes of any potential buyers; and even if the bona fide owner was able acquire bona fide title they found themselves still obligated for the balance of the loan. As yet uncharged.

Rabbi Lieb Pinter... former executive at a NY mortgage lender who defrauded Fannie Mae in a $44,000,000 USD home refinancing scheme.   Refinanced Fannie Mae loans but instead of remitting the money to Fannie Mae he deposited it into his own accounts.  Pinter has a criminal  record that goes back to the late 1970s. Bribed a Congressman... and ran a corrupt poverty program program that fed children rotting, stale food. He sent salami and cheese sandwiches to children requesting kosher meals.  Convicted, along with his partner in crime, Barry Goldstein, of conspiracy, wire fraud and bank fraud .  Sentenced to more than eight years in federal lockup and ordered to pay back more than $43,000,000 USD in restitution.

Rabbi Levi Deutsch... arrested in operation BidRig.  Deutsch used his connections to help launder $200,000 USD in crooked money through religious charities he controlled.  Sentenced to 18 months in federal prison and ordered to forfeit $25,000.

Rabbi Moshe Zigelman... served a 2-year sentence for his role in a tax fraud scheme.  Zigelman's Hasidic sect solicited an unknown number of $millions USD in donations, then funneled most of the money back to the wealthy donors - giving them huge tax breaks. In an unusual development, Zigelman refused to testify against other Jews and spent several more years in a federal lockup for contempt of court.

Rabbi Menachem Youlus... "The Indiana Jones of Rabbis".  Claimed to have "rescued" more than 1,000 holocaust-era Torah scrolls, some of which he said he'd dug up at sites of mass executions by the Nazis. He also, "miraculously found" a Torah scroll hidden beneath the floorboards of a barracks at Bergen-Belsen. Sold his "finds" to unsuspecting Jews for $5,000 to $20,000 USD apiece. Eventually charged with wire fraud. As part of a plea agreement, Youlus will repay his victims $1,200,000. He is free on $100,000 bond.  Sentencing originally set for 21 June 2012 but has evidently been postponed.

Rabbi Levy Izhak Rosenbaum... arrested with five other rabbis as part of a massive FBI sting (Operation BidRig) after being caught on tape offering to sell a kidney for $160,000 USD. "I am what you call a matchmaker," Rosenbaum told an FBI informant trying to broker a deal. Witnesses described Rosenbaum, 58, as a “thug” who pulled a gun on one reluctant seller, telling him, “You’re here. A deal is a deal. Now, you’ll give us a kidney or you’ll never go home.” Federal prosecutors said the investigation initially focused on a money laundering network that operated between Brooklyn, N.Y.; Deal, N.J.; and Israel. The network is alleged to have laundered tens of millions of dollars through Jewish charities controlled by rabbis in New York and New Jersey.

Milton Balkany... an Orthodox rabbi who tried to shake down a hedge fund company for $4,000,000 USD. Convicted of extortion, blackmail, making false statements and wire fraud. Balkany once lobbied the U.S. Bureau of Prisons to improve conditions for Orthodox Jewish prisoners. Sentenced to four years in a federal slammer. In a happy turn of events for this NY Jew, he served his time in Miami.

Rabbi Yitzhok Fischer... moral swindler. Accused of giving a baby boy, who soon died, herpes during the meziza b'peh circumcision ritual. He is believed to have infected two other infants while serving as a mohel. Under the Orthodox practice followed by Fischer, he used his mouth to suck the blood from the infant’s penis after cutting off the foreskin....
Posted by Citizenfitz at 2:59 AM