Why America is doomed 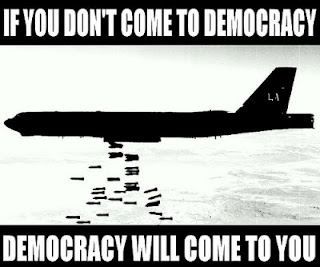 I know... America isn't a "democracy" and it never has been.... Still, it's a useful start for my thesis.  Strictly speaking, democracies are a system of popular government: one man, one vote.  There may be qualifications: women can't vote, slaves can't vote, non-land owners can't vote, etc. But the idea is of a  participatory electorate.  There haven't been many democracies in the world. The Bushmen of the Kalihari and ancient Athens come to mind.  There haven't been many democracies in the world because democracies are inherently unstable and tend to collapse when pushed.  The effete Athenians were defeated by the monarchical (sort of) Spartans in the Peloponnesian War.  And monarchy has been the general rule of human political thumb.

Though they've gotten a bad rap, monarchies are actually the best form of goverment.  Even if they fail to do a good job, monarchs have a vested interest in at least trying to do a good job.  And though idiots may sometimes ascend to a throne most of the monarchs who've passed through history were capable enough people.  Furthermore, monarchies reflect the system in heaven. Heaven is no democracy... or republic.  The last guy to try to institute a populist revolution in heaven got sent packing.

Anyway, the US was designed as a republic - not a democracy.  The Founding Fathers considered democracies to be the height of human political folly.  Worse even than monarchies.  America hasn't been a republic for a long time, since at least 1913 - if in fact it ever was a republic.  No my friends, a handful of rich people are calling the shots here in the USA now, and in that sense things are pretty much the same as they ever were: America's an oligarchic plutocracy - camouflaged as a republic.

The  Soviet Union under Stalin called itself "democratic"!  Maybe the hard ridden Soviet peasants bought into it. Who knows?  But we sure have!  Anyway, "democracy" is a word loaded with powerful emotions so the ruling cabal has decided to leave it alone for now. Americans are content to think they're "free" and good and that they live in a "democracy". And the ruling elite are content to let them think that because it's helpful to their ends.  But plans for big changes are underway.

The big changes involve returning America and Americans to what the plutocrats see as the natural order of things: a small, ruling clique (themselves), a larger nexus of administrative/technical circles, and beneath these, the great unwashed - toiling away twelve hours a day, seven days a week, for their jet-setting masters.  Then getting euthanized when their operating expense ratios head to the red.  "How do you know this?" some have asked.  I know this because I can put two and two together; and also because the direction is so obvious - allowing me, and others, to make geopolitical predictions with astounding accuracy. Not to brag but if you present me with a political problem of global import, I can likely tell you how it'll play out.  I knew well in advance that Obamacare would pass muster with SCOTUS.  This is because there really is a cruel, cynical (and predictable) cabal, ruling from above the clouds. We seldom here about them down here because plutocrats like a certain anonymity.  Much for the same reasons criminals do.

The plutocrats achieve their ends by (gradually) gaining control of the political process. Friendly politicians, sheriffs, bureaucrats, judges, etc. are bought into office, then elevated as needed. Personal competency doesn't necessarily matter much; look at Joe Biden - America's VP!  Or Supreme Court blowhard Anthony Kennedy. Intellect notwithstanding, such people CAN be counted on to fulfill certain roles in the coming usurpation of America... that's the important thing. Many, probably most, of those thus elevated are also Freemasons.  In my opinion ALL the really big people in Washington DC are Freemasons or closely leagued with them. And most of the lesser luminaries there are probably Freemasons too. This makes sense because Freemasonry is a gnostic cult with a materialistic world view acceptable to the (Jewish) plutocrats in a way Christianity is not. Did I forget to mention that Jews, though only about 2% of America's population, comprise half its millionaires?

Freemasonry is symbiotically intertwined with organized Jewry through its relationship with B'nai B'rith - the Jewish Masons.  Jewry knows its numbers are insufficient for the kind of Jew dominated world they'd love to see, so they grafted the Masons to their cause (this isn't saying that all Masons, or even Jews, are evil conspirators in a global plot; but quite a few of them are, especially the higher ups). Don't believe me?  Look at all the Freemasons in Washington!  Look at all the Jews holding high office in "Washingstein DC"! Look and see how Israel wags the American dog.  This is no conspiracy theory - it's demonstrable fact:

It's also a fact that most of those eligible to vote have no idea who their Washington representatives are.  So, riddle me this: who are the politicians going to listen to: a bunch of gumps with a handful of bucks who don't even know who they are; or a handful of gumps with a bunch of bucks who DO know who they are - and can cause them trouble?  It should be pretty obvious that when the interests of the great unwashed and the interests of the billionaires diverge, well... guess whose interests are going to take preference?

In the plutocrat's view this is the ordained measure of things.  And given the holes in its theory and practice, it's the ordained measure for republicanism. Ergo, it's largely inevitable that you and I are going to get poorer - and the plutocrats will become even richer. I say "largely" inevitable because Christianity can change the game. At one time, America was a somewhat Christian nation and we prospered.  Weak as it was, American Christianity still kept the plutocrat's greedy dreams in check. We don't have that working for us today.  America's turned into a post-Christian, neo-pagan circus.  Though in reality it's a stockyard made up to look like a circus....

The plutocrats know how far they can push things - after all, they can afford the polls and psychologists - though here too they like to pass the bill on to the peasants. They seem confident that they can push pretty hard now but they're probably wary that too much commotion could wake the sleeping peasants.  One hundred million guns in US peasant hands definitely makes them more circumspect - so no doubt they're working hard on doing away with that problem. I think the solution to their peasants with guns problem will have to involve some element of gun "terror" - in order to stampede the peasants in the desired direction.  They would also want to create quarreling factions to prepare the way for gun confiscation laws like one sees in the UK.  BTW - it's revealing that the British government never speaks of confiscating the British state's guns....  But the peasants must be brought to heel... by hook or by crook, and the plutocrats will use whatever necessary measures they can get away with.

Some have spoken about a second American revolution, naively believing that the American people have the sense to do the right thing. The American people are a shadow of what we used to be. Nearly as jaded and corrupt as the Europeans! But whereas the Europeans at least know they're corrupt, Americans hold stubbornly to their delusions of "freedom and democracy" and the Fourth of July! They don't realize that, analogous to Fort Knox, the moral deposits that once made so much possible here have long since been cleaned out.

Many... most? Americans have descended into a kind of functioning madness. Here I include the so-called "right wingers" with the left wingers:  the Armageddon dreaming, Israel fawning protestant Evangelical is just as mad in his way as the liberal op-ed columnist. Furthermore, in an evolutionary tour de force, what was once the American "right wing" has over the years quietly migrated leftward.  What we effectively have in this country now is TWO left wings - one is just a bit more to the left than the other. The insanely pro-Israel, war mongering neo-con is becoming indistinguishable from the insane, state worshiping, baby seal loving, baby human killing liberal. Thus, America descends hellward in an unncecessary, but impressive nonetheless, death spiral.

The plutocrats and Jews may have a case though: there are a hundred million numbskulls in America - at least!  (and their mothers are always pregnant)  People who clearly shouldn't be allowed anywhere near a voting booth are foolishly allowed to vote (not to say that the American electoral process is bona fide - it's clearly overflowing with fraud).  But this army of numbskulls, the right and and the left, will doubtless show themselves obedient soldiers to their unseen generals - when the plutocrats finally declare war on the Pax Americana.