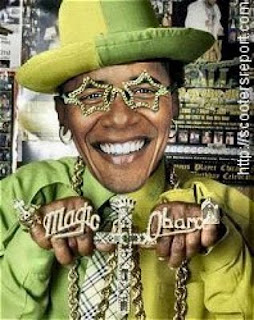 "In a move certain to fuel the debate over Obama's qualifications for the presidency, the group "Americans for Freedom of Information" has Released copies of President Obama's college transcripts from Occidental College. Released today, the transcript school indicates that Obama, under the name Barry Soetoro, received financial aid as a foreign student from Indonesia as an undergraduate. The transcript was released by Occidental College in compliance with a court order in a suit brought by the group in the Superior Court of California. The transcript shows that Obama (Soetoro) applied for financial aid and was awarded a fellowship for foreign students from the Fulbright Foundation Scholarship program. To qualify, for the scholarship, a student must claim foreign citizenship.

"This document would seem to provide the smoking gun that many of Obama's detractors have been seeking. Along with the evidence that he was first born in Kenya and there is no record of him ever applying for US citizenship, this is looking pretty grim. The news has created a firestorm at the White House as the release casts increasing doubt about Obama's legitimacy and qualification to serve as President article titled, "Obama Eligibility Questioned," leading some to speculate that the story may overshadow economic issues on Obama's first official visit to the U.K. In a related matter, under growing pressure from several groups, Justice Antonin Scalia announced that the Supreme Court agreed on Tuesday to hear arguments concerning Obama's legal eligibility to serve as President in a case brought by Leo Donofrio of New Jersey. This lawsuit claims Obama's dual citizenship disqualified him from serving as president. Donofrio's case is just one of 18 suits brought by citizens demanding proof of Obama's citizenship or qualification to serve as president.

"Gary Kreep of the United States Justice Foundation has released the results of their investigation of Obama's campaign spending. This study estimates that Obama has spent upwards of $950,000 in campaign funds in the past year with eleven law firms in 12 states for legal resources to block disclosure of any of his personal records. Mr. Kreep indicated that the investigation is still ongoing but that the final report will be provided to the U..S. Attorney general, Eric Holder. Mr. Holder has refused to comment on the matter...."

"LET OTHER FOLKS KNOW THIS NEWS, THE MEDIA WON'T !

Subject: RE: Issue of Passport?

"While I've little interest in getting in the middle of the Obama birth issue, Paul Hollrah over at FSM did so yesterday and believes the issue can be resolved by Obama answering one simple question: What passport did he use when he was shuttling between New York , Jakarta , and Karachi ?

"So how did a young man who arrived in New York in early June 1981, without the price of a hotel room in his pocket, suddenly come up with the price of a round-the-world trip just a month later?

"And once he was on a plane, shuttling between New York , Jakarta , and Karachi , what passport was he offering when he passed through Customs and Immigration?

"The American people not only deserve to have answers to these questions, they must have answers. It makes the debate over Obama's citizenship a rather short and simple one.

"Conclusion: When Obama went to Pakistan in 1981 he was traveling either with a British passport or an Indonesian passport.

"If he were traveling with a British passport that would provide proof that he was born in Kenya on August 4, 1961, not in Hawaii as he claims. And if he were traveling with an Indonesian passport that would tend to prove that he relinquished whatever previous citizenship he held, British or American, prior to being adopted by his Indonesian step-father in 1967.

"Whatever the truth of the matter, the American people need to know how he managed to become a "natural born" American citizen between 1981 and 2008..

"Given the destructive nature of his plans for America, as illustrated by his speech before Congress and the disastrous spending plan he has presented to Congress, the sooner we learn the truth of all this, the better."
Posted by Citizenfitz at 9:17 AM