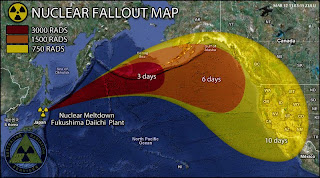 Yup, worrisome stuff is going on whichever way you look. Things are breaking down all over, and the globe being interconnected in ways like never before, the disaster(s) in Japan are sure to have a wide reverberation. Irrespective of an end of the world scenario, this nuclear catastrophe has the potential to ricochet like a house of dominos.

"Radiation is spewing out as we speak. Evidently, the explosions have indeed damaged the containment structure and suppression chambers surrounding the cores. These water-filled enclosures cool the fuel rods, which are not just uranium as you might think (bad enough) – but infinitely worse — it’s reprocessed plutonium and uranium oxides called MOX. This could be a million times Chernobyl...." The Incogman