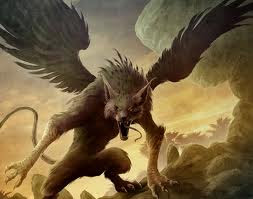 The Usa was a mighty creature of long ago. It's said that in its youth it was quite beautiful; however, this much is certain: by the time it was mature it had become a monster. Initially it had two heads and two wings. However, after some years had passed one of the heads largely overgrew the other and assumed its place. At about the same time the two wings began migrating to the far left side of its body. One of the wings was not as far to the left as the other and for reasons that can now only be guessed at, was called the "right wing".

After this flounder-like metamorphosis the Usa could only fly in circles. The two wings flapped comically as it struggled to stay aloft. However, the spectacle greatly pleased the people below - who nodded approvingly and said: "See how the beast protectively circles us!" The ungainly wings occasionally collided with one another causing a great flurry of feathers and some minor wounds. Seeing the feathers fly, the people would say, "Hooray, for the right wing!" Others would lament, "I hate the right wing!" But the Usa would lumber on with hardly a squawk or a look back.

Eventually, the Usa grew enormously fat and its two left wings fused indistinguishably into one huge useless wing. However, the people, seeing how big it had become, proudly said to one another (though not a little out of fear): "Who will dare to oppose us now that our beast is so big?" Likewise, the Usa encouraged them to do it homage, growling: "I will defend and feed you." What remained of its other head said similar things.

Most of the people didn't notice how much time and energy the Usa had begun demanding of them; or how they were slowly growing skinny while it was getting ever fatter. Day and night it told them how lucky they were to have it for their beast, and they cheered as it strutted and postured.

Some did notice problems to be sure, and sounded a complaint, but they were mostly ignored, or jeered as "troublemakers". The beast hated the troublemakers. It pretended to ignore them yet always kept an eye turned in their direction and looked for an opportunity to be rid of them. "You cannot love Usa yet hate the beast!" it told the people. This sounded good so most of them continued feeding and grooming the beast without complaint. The beast spoke to them graciously; reminding them that it was their loyal protector and how lucky they were to have it for their beast... all the while though it was counting their numbers.

Early on, a strange scene was noticed by some: a small but audacious man with a very big head began climbing up the Usa. After a long time he reached the its head(s) and held up a golden crown. He was so small and the Usa so large that it was difficult to see him. Furthermore, he would, from time to time, conceal himself in the beast's thick coat. He began to whisper in its ear while hypnotically waving the gold crown before its eyes. This seemed to dazzle the Usa. Not long afterwards it began threatening some of the neighboring beasts - as well as some of its own people.

However, most of the people couldn't see the man or the gold crown. Neither could they hear his whispering. They had no explanation for the beast's mercurial moods and assumed it was just suffering a passing indigestion. They did notice that some of them, particularly their sons and grandsons, were disappearing, but didn't know why. The "troublemakers", who could see the beast driver and hear some of what he whispered told the people what was happening, and even what would happen next. At this the driver whispered into the Usa's ear and it began mocking the troublemakers for making up "crazy stories". "Surely", it told the people, "if there WAS a man controlling me, you would ALL see him." "You're right!" the people replied. "We would certainly see him too! The troublemakers must think they're better than we are!"

During times of danger, the beast driver would disappear into its coat; but as soon as the coast was clear, up he popped again. Urged on by the driver, the Usa began attacking beasts and people near and far. Eventually, the people became worried by the beast's many demands and increasingly irrational behavior. That is, those people who hadn't found a comfortable home on its immense body. But others were becoming able to see the Usa's driver and to discern a pattern in it's seemingly random viciousness: whenever the little man whispered in its ear and pointed, the beast would turn and attack... devouring even its own people.

Finally awake to the danger posed to them by the beast, the people began to fight back. Some clambered up its enormous sides to reach the driver - who responded by goading the beast into even greater fury. They were also attacked by the Usa's many parasites, who fought back furiously, saying, "Who is like the beast" and "Who can fight him?" for they had come to love the beast as much as themselves. The beast began snapping, thrashing and flailing wildly; killing many of the attackers but also many of the parasites.

As the people fought their way to the head(s), the driver suddenly began stabbing and cursing the beast too. "Help me kill the monster!" he cried out. Weakened by the combined onslaught, the Usa staggered and bellowed. "We need a new beast... a beast of and for the people!" the driver swore as he stabbed and hacked at the head(s). Some of the leaders were impressed - for the driver made a persuasive case - and they were not a little fascinated by the strange beauty of the golden crown he held. But others pushed past, disarmed the driver and prepared to throw him to the ground far below. Seeing himself in great danger, the driver began to wail a sad, high pitched lament. Almost immediately another beast appeared on the horizon and charged straight at the Usa. The second beast furiously attacked and finally killed the Usa - as well as a great many of the people - and for a while took its place as the chief beast of the world.

No one knows for certain what became of the strange little man with the big head and golden crown. Some say he died in the fighting and that his body lay unrecognized among all the others. Some say he hid himself deep in the beast's coat and when the fighting was over quietly skulked off into the darkness. But others claim to have seen a small man with a big head climbing up the sides of the second raging beast, singing a strangely familiar song, and waving a crown of gold.