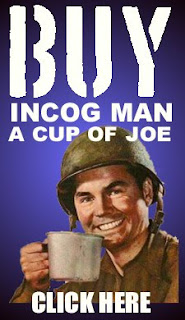 I used to wonder about the Incogman, “Is he a Mossad asset running a deep cover operation?” Or, “Is he a rogue Jew, playing one of their jewvenile, ‘I’m so much smarter than everyone else… tee… hee… hee….’ games?” But I gotta say it: if he’s running a stealth Jew joint, he’s better than good at it.

Jews like working both sides of the street, so it comes as no surprise they’d open up “antisemitic” websites as part of their depraved nefariousness. They’re good liars (always have been) but eventually the truth outs them. And much to their chagrin it always does. People are wiseing up to their Zio-lies, their holo-lies, their fetzen-lies…. Like a juggler who takes on too many plates their lies eventually come crashing down on them.

I’ve come to the conclusion that although he’s a strange cat, Incogman is a bonafide White man. Why so? 1. His message has remained consistent over time. No subtle shape shifting; and though I disagree with some of his hasbarat accusations, most if not all of those who got spamblinka’d deserved it. 2. He rarely asks for money. If he were really a Jew there’d be no end to that. 3. He hasn’t banned me. If he were really a Jew I’d have been bounced by now.

Based on these reasons I’ve got no problem buying him a cuppa now and then.