It's cops vs cops in Greece! 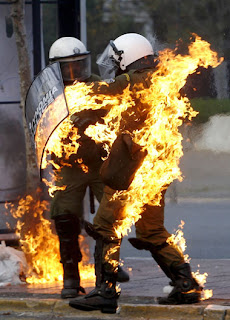 This story is a lot more than the amusing sideshow it first appears to be.  We're not hearing much about what's going on in Greece: the massive unemployment, adult children moving back in with their aged parents, shortages of basics, long lines, lay-offs, wage cuts, "austerity measures", tax hikes, riots....

However, if Greece topples into bankruptcy they're probably going to take others in the Eurozone down with them: Spain and Italy are the next dominos in the line.  France, Germany, Britain and the US are the props saving the Euro from collapse... for now.  But Germany is growing restless at this heavy financial yoke - even though they were the earliest and most enthusiastic advocates of the Eurozone - and are busy re-thinking their role in the matter.  The big money is growing nervous.

Of course, banking is global and highly interconnected, and the risk of cascading cross defaults in Europe spreading around the world like a financial mega-quake is a concern:


"Like a latter-day Tower of Babel , (American) public debt has now surpassed the size of the entire US economy and will very soon exceed 20% of the combined world economy - but it shows no signs of letting up! Those responsible for building this skyscraper of unpayable debt - politicians who promise the world - and the people who believe them; and central bankers who print money from nothing to make it seem okay, think they can postpone the day of reckoning indefinitely - they can't, but they will not be stuck with the tab in the end - you will!
"All skyscrapers - whether made of steel or of seemingly-unlimited wads of debt-backed fiat currency - have a limit to how high they can go before becoming subject to failure against the forces of nature. The next financial tremor will almost certainly lead to collapse of the tallest debt high-rise in history!

"The next shift in financial tectonic plates will result in collapse for these unstable skyscrapers of debt! Their speedy collapse will cause the US to lead the world into a deflationary depression by mid-2013. The economic disaster will be unlike anything seen. Avoid being a debt slave  - START GETTING READY TODAY!" - The non-conventional thinker
http://nonconventialthinker.blogspot.com/2012/08/financial-quake-next-skyscraper-debt.html
The US will not escape this inevitable and world wide catastrophe.  In fact we'll probably get hit worse than most; and we should look closely at what's happening in Greece as a portent of things to come.  The difference here is that there are about 200 million guns in private hands - as well as scores of millions of crazies....  Expect things to get ugly.