"Homophobia" - does it actually mean anything? 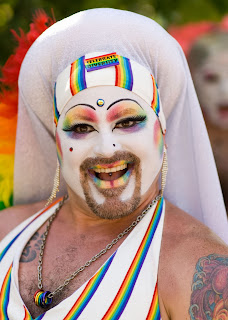 Are you "afraid" of this freak - or just repulsed?


The word "homo" appears in both classical Greek and classical Latin. In Greek, homo means "the same" - e.g., "homogenize," "homonym." In Latin, however, homo means "man," or "mankind": "Ecce homo!"  as Pilate said of Christ; or homo sapiens, "man, the species capable of wisdom".

Phobia means the same thing in Greek and Latin: "fear," "flight" or "to avoid." So the person who is hydrophobic fears water and avoids it, fleeing if necessary. If the term "homophobe" is derived from the Greek homo, it means "fear of the same" or "flight from the same."

That makes no sense here.

If "homophobe" is derived from the Latin homo, it means "fear of man or of mankind".  That doesn't make sense either.

But homos and their supporters aren't known for making sense.

That's because perversions of the flesh soon find their way into the mind.