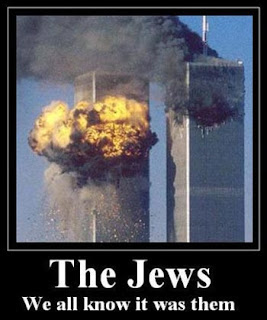 Someone going by the nom de plume "PhysicsVsFraud" has a YahuTube channel with the following helpful information:


"In honor to Army Cpl Pat Tillman, who would want the TRUTH revealed at all costs."


1. The Project for a New American Century was written in Israel in 1996 under the name - A Clean Break: A New Strategy for Securing the Realm. Requires a new Pearl Harbor for their plan.

3. Zionist Jew Frank Lowy paid $127 million in May 2001 for a 99-year lease on the retail area beneath the New York World Trade Center. Member of the Golani Brigade & fought in the Israeli war of independence.

4. Ronald S. Lauder was key individual who lobbied for the privatization of the WTC. Lauder has funded a school for the Mossad in Herzliya, Israel.

5. Airline Security Company at BOTH the Boston & Newark airports on 9-11 was a wholly-owned subsidiary of an Israeli company (ICTS). Most employees were ex- Shin Bet Israeli agents.

6. Security at the WTC was run by Kroll Associates, owned by Jules Kroll & Jerome Hauer (BOTH Jews). Hauers mother involved in the creation & maintenance of the State of Israel.

8. Chairman of Pentagons Defense Policy Board, Richard Perle, was expelled from Sen. Henry Jacksons office in the 1970s after NSA caught him passing highly classified documents to Israel.

10. Israeli messaging service Odigo sent AT LEAST 2 Israelis prior warnings on 9/11, 2 hours prior to attack. Odigo has offices in New York & in Herzliya, Israel. Herzliya happens to be the Head Quarters of Mossad.

11. Zionist Jew Pete Zalewski was the air traffic controller responsible for 2 of the planes on 911 & another plane full of top Pakistani military officials whose plane (Egyptian Fl990) crashed 2 years prior to 911.

12. Israeli Mossad Jews caught & arrested filming & celebrating WTC prior to & after 1st plane hits WTC. Jumping up & down, lighting lighters & holding them up in air.

17. Zionist Jew named Adam Pearlman is the AlQaeda spokesman. Lived with grandfather prior to joining AlQaeda, grandfather on board of ADL & huge Israeli supporter. His father helped run the Hippie Movement in SoCal then moved family to run a Kosher farm.

18. S.I.T.E. website releases AlQaeda tapes but is owned by an Iraqi Jew who was in Israeli IDF. Her father was an Iraqi Jew & was sentenced to hanging after being caught SPYING FOR ISRAEL in the 1967 war.

20. The Cousin of alleged 9/11 hijacker Ziad al-Jarrah has been exposed as a long standing Israeli spy

21. According to FBI, in the Year 2000 Israeli Mossad had penetrated secret communications throughout the Clinton administration, even Presidential phone lines.

22. After 9/11 Israeli Prime Minister Sharon said: We Jews own America & the Americans know it.

24. Israeli Mossad pretends to be Al Qaeda in Palestine but is caught by the Palestinian Authority in 2002.

Of the MOSSAD, the Israeli intelligence service, the SAMS Army Officers say: Wildcard. Ruthless & cunning. Has capability to target U.S. forces & make it look like a Palestinian/Arab act.

30. Bin Laden constantly denies committing 9/11, until 4 days before the 2004 election. Video considered fake.
Posted by Citizenfitz at 11:18 AM