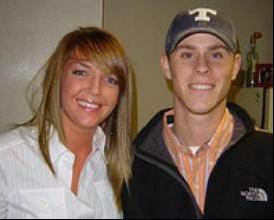 Remember poor, pitiful Rodney King? Remember James Byrd - dragged to death behind a car? Of course you do! You literally heard of nothing else for weeks on end. Well, here are some stories you NEVER heard about on the nightly news. Thanks to Pat Healey at Incogman.net for doing much of the leg work here:

Streator, IL - Patricia Stansfield, a 46-year-old White woman, was abducted by a negro male who had stolen a car belonging to one of her friends.  Ms. Stansfield was tied to the car's rear bumper and proceeded to drag her two miles down a highway. The dragging caused her death. The media blacked out national coverage of this murder, although they had sensationalized a very similar murder in Jasper, Texas, involving a White killer and a negro victim only a few months earlier.

Little Rock, Arkansas - Laurie White, a White woman, attacked by a negro felon, was beaten, raped and hung by an electrical extension cord until she was dead.

South Carolina – A White female, Melissa McLaughlin, is raped, tortured and skinned alive in a tub of bleach by seven negroes.

Jacksonville, FL – A mentally retarded white man, Gregory Griffith, is beaten and stomped unconscious by a group of blacks and died a few days later. The negroes admitted to the police beating Griffith because “he was White”.

Poughkeepsie, NY - Kendall Francois, a negro strangled eight White women and kept some of the bodies in his house for over a year.

Alexandria, VA – An eight year old White child, Kevin Shiffiet, is killed when his throat is slit by a negro male who also stabs his 80 year old great grandmother and punches her in the chest. Police find a rambling, handwritten note stating. “Kill them raceess whiate kidd’s anyway”.

Burlington, NC – A ten year old White child, Tiffany Long, is abducted, raped, sodomized, sexually tortured and murdered by two negro males and a negro female. The negro female rams a broomstick up Long's vagina and rectum, killing her. The parents were prohibited from seeing their dead daughter’s body. The story was reported only by the local media - who claimed that race had nothing to do with it.

Fayetteville, NC – Two White women, Tracy Lambert and Susan Moore, are carjacked by a group of seven negroess and Hispanics then taken to a field and shot execution style in the head. This murder was part of a gang initiation. The bullets found in the victims’ heads were painted blue, the Crips gang color.

Alton, Illinois – A White male, Richard Skelton, is attacked and stomped to death by a group of 25 negroes while negro onlookers yell, “Kill the cracker”.

Cleveland, OH – A five year old White girl, Devon Duniver, was stabbed to death by a negro teenager who said after the murder, “She got what she deserved.”

Kansas City, MO – A six year old White child, Jake Robel, is dragged to death by a negro carjacker who drove away even as the boy being dragged screaming outside of the car door while tangled in the seat belt.

Buffalo, NY – A White man, Gary Traska, is stomped to death by three negroes. Many of his organs were actually split apart from the savage beating.

Media, PA. Aimee Willard, a White coed at George Mason University was in her car when a negro male crashed into it. When she got out to examine the damage, the negro attacked her with a crowbar and beat her to death. He then removed her clothing and raped her corpse. Afterward he threw the body into an empty lot.

Denver, CO. Brandy Duvall, a 14-year-old White girl, was kidnapped at a bus stop by seven members of the Bloods. They drove to a remote house and took turns raping her, then raped her with a broom handle. Finally, after stabbing her 28 times with a knife, they dumped her body in a ditch.

Fayetteville, NC – A White soldier, Donald Lange, is attacked by seven begro soldiers. Lange is rendered a vegetable. The media blacked out national coverage of this attack, although they gave lengthy national publicity to another crime involving a negro drug dealer killed by a White soldier, in the same town.

Michigan - Kayla Rolland, six years old, is murdered by a negro classmate who'd brought a gun to school Both the murderer and the victim were in the first grade. The negro had a history of assaulting White children, on one occasion stabbing a classmate with a knife. The media gave some limited coverage of the murder, but concealed the fact that the killer was a negro.

Miami, FL – Seven Whites are murdered by the negro only Yahweh Cult; whose leader orders the members to cut off and return the ears of the victims as proof of the murders. The trial, which you never heard anything about, was conducted at the same time as the Rodney King trial.

Charleston, South Carolina - Troy Knapp and his friend Gary Thornburg were riding their bicycles when they happened onto a group of male negroes. The mob attacked the two White men, knocking Gary unconscious and beating Troy with various objects including pipes. A large portion of Knapp’s skull had to be removed to allow for swelling in his brain. A damaged portion of his brain had to be surgically removed. He is seriously and permanently injured, and will never recover from the injuries of this beating.

Wichita, Kansas- Two negro males broke in to a house and attacked five young Whites, all in their twenties, threatening them with guns. After driving their victims to an ATM and ordering them to withdraw money, the kidnappers took them to a deserted soccer field. There they raped the two White women in front of the men, including the fiancé of one of the young men. Finally they ordered the five White victims to kneel and shot them all execution style. Only one of the young women was not killed. She walked more than a mile, naked and bleeding through the snow until she found help.

Seattle, Washington- Mardi Gras or “Fat Tuesday” celebrations in that city were disrupted when gangs of negro males roamed the crowd of thousands attacking White men and women, killing one and injuring 72. They were heard yelling racial epithets during their attacks.

Charlottesville, Virginia– Police arrested 9 male negroes for a series of vicious gang assaults against White students in that college town. Of the nine arrested, one was an adult and the rest juveniles, one of them a local high school football “star.” Even though some of the negroes told cops that they intentionally chose their victims based on their race, authorities have declined to classify the attacks as “racially motivated.”

North Carolina - 12 year old Emily Haddock was home sick with strep throat when her home was invaded by four negroes. Emily was shot twice in the head and left to die as her home was ransacked.

Tulsa, OK - Two White college students, Ethan Nichols, 21 and Carissa Horton, 18 were walking through a park when they were acosted by two negro males who robbed them, then executed them with shots to the head.

Knoxville, TN – Channon Christian and Chris Newsome (see photos at top) are carjacked by a group of five negroes. Taken to one of the perp's house, both are bound, sodomized, raped, tortured, then murdered. Channon Christian was douched with and forced to drink bleach. She then was stuffed, with a plastic bag over her head, into a trash can where she suffocated.