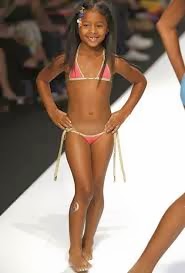 "When the women become bad the nation perishes." - Lakota proverb


You see them everywhere: Magazines, TV, on the streets, at the beach.... Ten year old girls tarted up as if they're twenty.  Make-up, pierced ears, jewelry, short shorts, tight pants, bikinis... but don't stare, PERVERT! Pre-teen temptresses... but do NOT touch, YOU DEVIANT!

Even if you think about it, but don't act on it, you may still find yourself in some very deep juridicial doo-doo. And when some degenerate gives in to his demons, the world rises as one to render stern judgment (unless of course you've got friends in high places - in which case it's all hushed up. Laws, like taxes, are for the little people).

So, what's the deal here?  National schizophrenia?  On one hand little girls are being exhibited as objects of precocious sexuality. On the other hand YOU MUSTN'T VIEW THEM THAT WAY. And you damn sure better not act that way. Hmmm....  Graham Greene once got in a lot of trouble for stating the obvious in an article he wrote about Shirley Temple:
http://www.movingimagesource.us/articles/our-man-in-london-20090821

In psychology there's an interesting phenomenon called cognitive dissonance. CD happens when a person's proclaimed values are revealed to be in conflict with their real values. When their internal contradictions are exposed to the light, the person generally reacts in one or more of three ways: silence, confusion, anger:
http://en.wikipedia.org/wiki/Cognitive_dissonance

Looking at America as having its own national psychology, distinct from that of other nations, it seems to me that CD is a serious mental health issue here. Americans will break into song over certain values, like "freedom and democracy" - but then they'll do things that show what they really value is tyranny and serfdom.

In the US we make a big deal out of "Let's do it for the children!" Even as we abort them by the tens of millions; or at least try to have as few as possible. It's my opinion that people living in a state of cognitive dissonance are easier to (mis)lead/(mis)rule. Just look at all the so-called liberals spewing their inane nonsense about things like "equality". It should be obvious that "equality" necessarily implies inferiority/superiority. After all, who wants to be equal, the superior or the inferior?  So, even though they don't realize it, what liberals are really saying is that minorities, women, homosexuals, etc, are actually inferior. If someone exposes this bare faced contradiction between what he thinks he's saying and what he's actually saying, the liberal often goes into cognitive dissonance - usually one of the angrier forms.

We see this with regards to America's attitude concerning juvenile females: saying they must be loved and protected - even as we dress them up like little prostitutes. Then, when some degenerate acts out his base impulses, we stand back in horror and demand the full fury of the law be brought down on him. If you molest a girl in America there's a very real possibility that you'll be punished more severely than if you'd murdered her.

There is always a ruling elite. Everywhere. In every age. So forget that foolish twaddle we were taught about about American "democracy". America's form of government is a plutocratic oligarchy.  Given that, it follows that these people would be privy to lots of interesting information the rest of us know little or nothing about. Psychology is a field of knowledge. Understanding the principles of human psychology is useful to the elite (helping them to know exactly what they can get away with). Even the Roman emperors took a careful accounting of the public temper before doing anything serious. So, the ruling elite are necessarily very interested in, and have much knowledge about "the people".  Knowledge is after all a form of power. And "power shared is power diminished...."

Using these basic principles we can see that the ruling elite must have a system in place for understanding the masses... and controlling the masses. In Roman times they had a surprisingly sophisticated secret police - and bread and circuses. In our times the mass media and the principles of social psychology certainly enjoy a similar, dominant role. Not to forget the secret police....
http://en.wikipedia.org/wiki/Frumentarii

Furthermore, we can extrapolate that the ruling classes would want to keep the principles and methods of the process to themselves. What probably matters most to them is having a quiescent, obedient, ignorant public.  Particularly, an obedient public.

Given the technological advances of the last two hundred years, the advances in psychology in the last 100 years, not to mention the immense fortunes at stake, it's incredible to think today's elite wouldn't have a clock-like system for managing the masses. Extremely sophisticated systems for taking the public's vital signs must be in place if they are to protect their privileges and prosperity.

Given this it seems that mass movements and the potential for mass movements are of special concern to them. They want the peasants walking predictable paths; and only a few of these. The US federal government herded the unruly Indians on to reservations and plied them with food and drink to keep them quiescent. The same mindset is at work today. They appear to have invested an especially great deal of time and effort in analyzing and appealing to women:

How a woman's mind really works

We can easily see this in the demand of liberals for more "equality". One would think equality is the highest virtue to them. The liberal hears about some inequality somewhere and reacts instinctually - in programmed ways that serve an elite goal: More debt - and more government. Let us recall that the mainstream media is owned by the same elitists who obsess over the details of social psychology.

Believe it or not, America is a liberal nation - and always has been. The overarching principles on which America was founded are pure liberalism: rebellion, materialism, secularism, internal contradiction.... Irrespective of all the "God bless the USA" bs, whenever one looks seriously at America he discovers cloven hoofprints... everywhere. You'll hear talk on Sunday about "getting America back to it's Christian foundations."  It's meaningless to talk about getting America back to its Christian foundations. It's foundations weren't from God.

Americans are infected with false ideals... and believe in them vehemently. This isn't surprising as people are more easily convinced by false ideals than true ideals. One of these is that we have the inalienable right to do what we want with our own bodies; for example, so-called "gay marriage". Most of the kids today seem to feel that "gay marriage" is acceptable. Older Americans generally see it for the madness it is. Still, few of either view will see it as a predictable outcome of the very precepts upon which America was founded.

"What I do with my body is my own business!" Is about the only dogma known today. Of course the sayer will then obediently buckle up as she drives home from the pro-choice rally. Women in particular seem to have a special affinity for being lied to. They demand, almost, to be lied to. And the mass media will happily oblige them. Well aware of their vanity the media attacks that flank in detail. Women are sold the ideal of physical appeal. ***Sexiness*** Many of them, especially the younger ones, fall for it and are outflanked. Spreading their legs is no doubt easier for older girls than learning how to cook, clean house, sew or bake apple pies. Most of them nowadays appear to have little concept of themselves apart from their bodies.

It may seem as if I'm too being hard on women. But take a look around and tell me where I'm wrong. I don't see that the men today are any better though. It's like watching a race to hell and wondering who'll win. But the title of this essay is "Dumb mothers". Most mothers....

One sees women's obsession with being sexy even spilling over into church.  Some of them come in looking as if they just dropped in from a gang bang. Going to the mall on Saturday is the real sabbath in America. The women in church dress pretty much like all the other women at the mall. And their juvenile daughters all dress pretty much like they do. It's practically a uniform at this point in time: tight jeans, jewelry and calf boots. Same at the pool or beach: miniature versions of mom. Given the explosion in the pervert population one might think mothers would be very prudent about how provacatively they dress their young daughters. But no, like jellyfish following the Gulf Stream, some unfathomable instinct keeps them on the same course. Their daughters may get molested or even raped along the way but by goddess they'll emerge with their sex appeal intact!

It goes without saying that the same dumb mothers who dress their little daughters in "sexy" bikinis are screaming and crying the loudest (especially for the news cameras) when their child ends of in the paws of some pervert. So, from what fumerole of hell issues the polluted vapor that's poisoned the minds of today's women? And what psychopathology moves them to corrupt their own daughters' innocent years? In trying to turn their girls into sex kittens are they compensating for their own inadequacies?

Consumerism, secularism, materialism, narcisissm....  These are the real values of America. Full grown now! Unfortunately, women who should be the moral guidestones of society have bought into it all. It may need repeating: lies bring little contentment. The modern American woman, lonely, narcissistic, discontented... seeks solace in the temple of the mall. Being lonely, she takes her daughter(s) with her. Being narcissistic she goes looking for things that flatter her vanity. Being unhappy she wants others to share her emptiness. Being a mother her children's lively innocence is an unwelcome reminder of her own dying emotions and nagging sense of unabsolved guilt. Being oppressed by a sense of guilt she is more easily persuaded by those who proffer cheap absolution.

America is like a drama whose ending can be seen coming long before it arrives. A Greek tragedy of a sort - in which the hero(ine)'s contradictions climax in madness.  America is dying - and women are most to blame for that. It's true they were talked into it - being dissatisfied with their ancient roles - by some smooth tongued luciferians; but this doesn't absolve them any more than it did Eve.

American women make a lot of noise about how they love their kids; but abortion, birth control and ten year old vixens tell the real story. They claim to love their daughters - then take aim, and fire, at their daughter's natural innocence. 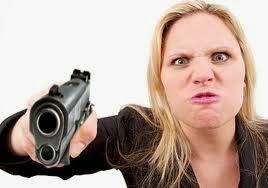