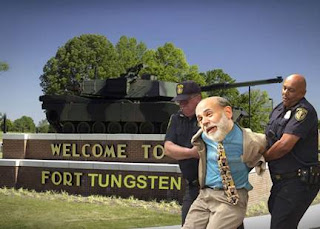 Think of the gold industry as being like an aircraft carrier: you probably don't think, see or hear much about it, but seen or not, it's very, very big; and it can hurt you or your country big time.

Folks, whether we know it or not, a serious problem is afoot: fake gold bullion is circulating through the world's gold markets; and it looks like the US government is deeply involved. Three years ago the Chinese government ordered an assay on some gold bars they'd just received as payment on a balance of trade matter. The bars turned out to be be fakes... tungsten cores covered by a 1.5mm thick plating of real gold. Within a few hours of this discovery the Chinese gold dealers who'd mediated the transaction were all arrested. But it turned out they were innocent. The gold bars originated within the US; and were in fact from the bullion reserves at Fort Knox.

So, how does something like this affect you? Ultimately, exactly like this: suppose YOU bought some gold that turned out to be fake....

China, the world's premier knock off market country, has decided to jump into the fake gold market itself and is now minting fake gold coins. Apparently these are of a very high quality and can pass most musters. Gold buyers must be very careful to predetermine that those Krugerrands selling at Ebay aren't fakes. It's gotten bad enough that some are now saying to avoid gold altogether and to buy silver instead; but it doesn't take a degree in rocket science to see that with a little re-tooling there's a profit to be had in fake silver too. The amount of fake gold now circulating is undoubtedly a measure of why gold spots haven't risen as they should have, given the weakened state of the dollar.

Gold is used extensively by governments and the big banks. Governments use gold to address balance of trade issues and to maintain public confidence in their paper currencies. Banks use gold to underwrite their loans. With a little imagination one can figure out how an incestuous relationship will develop between the banks and governments.

That the so called gold reserves at Fort Knox are non-existent can be easily deduced: at one time US coins contained actual gold and silver and had a worth equivalent to their face value: a silver dollar contained a dollar's worth of silver, etc. But the coins we use today are only slugs - with almost no intrinsic value. Are we seriously expected to believe that for the bank/government axis would debauche their own coinage, but would never debauche their bullion?

As I mentioned above, this is a serious problem for you and me - just as if we'd bought fake gold coins ourselves. How? Because governments and banks ALWAYS pass the bill for their bad decisions on to their clients. Due to our debased currency and debauched bullion, Americans are undoubtedly going to be living lower within a few years. Most of us anyway. That is, those of us who aren't minting our own phony gold coins....