An American near future scenario 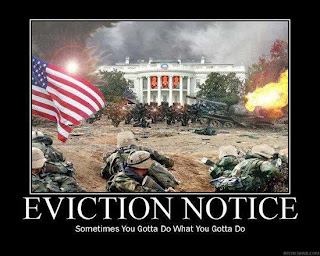 Massive unemployment. Bank failures: your life savings disappear overnight - but not your mortgage!  Shortages of basic commodities of life. Fifteen people living in one house.  Utilities brown outs. The Internet goes down. Wild rumors. People resort to bartering for basic necessities of life.

Government efforts to remediate the situation only seem to exacerbate them.

Americans finally wake up to the consequences of being suckers - and blame everyone else. Ration cards. Food riots. Race riots. Violent crime wave. Gasoline thieves. Hunger for Whites, starvation for Blacks. Black markets. Women, some as young as girls, prostitute themselves for a can of corn.  A proliferation of radical political groups.

Local law enforcement can't contain the swelling violence - and in fact are the focus of much of the violence. The military is called out to patrol the streets and maintain order. Military deployment on roads and highways, especially in big cities, where checkpoints are set up at all major intersections. You'd better have your ID.  Government false flag operations: particularly attacks by "right wing paramilitary groups" that are actually covert elements of the US government. American troops return from their overseas bases to garrison the US as martial law is declared.

Curfews. ID checks. "Temporary" suspension of habeas corpus, Posse Comitatus, search warrants and the rest of the Constitution after the President declares a state of national emergency. Gun ownership (except for the government) is outlawed. Private citizens are ordered to hand over their guns in or face draconian penalties. People are also ordered to turn in precious metals and "excess" food to the government. Those who don't are prosecuted as "hoarders".

Soldiers begin to rebel at what they are being ordered to do. Soon, mutinies erupt. Efforts to put these down fail - mainly due to the incompetence of generals who got their stars due to their political reliability more than thier leadership ability. A leading general finally realizes that the military occupation of the US by the US is becoming impossible in the face of so much resistance and, with the support of other leading officers, unleashes a coup. Civil war erupts. As the political situation deteriorates for the ruling elite, UN forces are called in. Canada and Mexico invade the US. The American generals are victorious and proclaim a "new democracy" - which is anything but.

As America recedes, Russia and China cooperate, and begin flexing their military muscles. Israel is warned, then threatened....