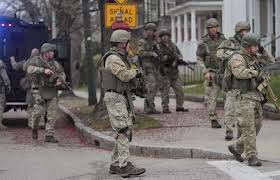 Massive unemployment. Bank failures: your life savings disappear - but not your mortgage! Brown outs. Shortages of basic commodities like food and water. Adult children (with their own children) moving back to mom and dad's house. Many people living under one roof. The Internet goes down. Wild rumors flourish. People resort to bartering for basic necessities.

Government remedies for these problems seems only to exacerbate them.

Americans finally wake up to the consequences of being suckers - and blame everyone else! Rationing. Food riots. Race riots. Violent crime wave. Gasoline thieves. Hunger for Whites, starvation for Blacks. Black markets. Women, some as young as girls, prostitute themselves for a can of corn.  Rise of radical political groups.

Local law enforcement can't contain the swelling violence - and in fact are the focus of much of the violence. American troops are called out, and return from overseas, to garrison the US as violence spreads.  Martial law is declared.  Military deployment on roads and highways, especially in big cities, where checkpoints are set up at all the major intersections. You'd better have your ID! People who come up on certain watch lists "disappear".

Attacks by so-called "right wing paramilitary groups" on the troops.  But many of these are actually false flag actions carried out by covert elements within the Federal government - the purpose being to instill a bunker mentality in the troops.

Curfews. ID checks. "Temporary" suspension of habeas corpus, Posse Comitatus, search warrants and the rest of the Constitution after the President declares a state of national emergency. Gun ownership (except for the government) is outlawed. Gun hunts commence. Private citizens are ordered to turn in their guns or face draconian penalties. People are also ordered to "share" precious metals and "excess" food with the government. Those who don't are arrested for "hoarding".

Soldiers begin rebelling at what they're being ordered to do. Mutinies. Efforts to put these down are not very successful - mainly due to the incompetence of generals who got their stars more for their political reliability rather than true leadership ability. As the political situation deteriorates, UN forces are called out. Canadian and Mexican troops enter the US to "restore democracy and order".

A charismatic leader, previously unknown, emerges from the social/political chaos... Fuhrer-like. By a string of clever parliamentary sleights, along with good press, he becomes "President", but in fact he's a dictator under other appearances.

He calls for a "new democracy" - which is anything but. Americans are so unnerved by preceding events that they fall for it, hook line and sinker, and find themselves clamped down on by a very oppressive tyranny.

As America struggles, Russia and China cooperate to exploit the power vacuum and begin seriously flexing their muscles. Israel is warned, then threatened....