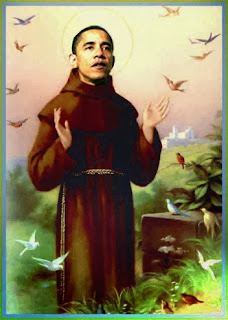 "It's easier to fool someone than to convince them they've been fooled." - Mark Twain

I'm not the first to say it - or maybe I am: Barack Obama isn't a "puppet" - he's actually an actor playing a role in a blockbuster movie. The biggest role of all time: POTUS! The evidence for this is becoming clearer. I also hold that not only is Obama an actor playing a part: the part was scripted years in advance of him ever being signed. In the age of the Internet this shouldn't come as too shocking a revelation.

I once worked with a woman who was well acquainted with the Tyson (of Tyson Foods) family. Back in the 80's she and the Tysons attended a fund raising dinner for Bill Clinton - who was governor of Arkansas at the time. The Tyson's were  front and center. Immediately after giving his speech Clinton made a beeline for their table. He spoke with the people seated there for a few minutes before moving on to circulate among the other donors. Mr. Tyson then turned to those with him and said, "You all don't know this yet, but you just spoke with the future President of the United States!" Tyson knew the fix was in four years before it ever happened.

Similarly, the fix was in on BO's rocket-like ascent to the Presidency long before he ever took to the stage at the democratic national convention back in 2004.

What's more interesting, in my opinion at least, than BO's scripted rise to glory and the clearly artificial nature of it all is that so many (most?) people have been taken in by it. Millions believe he's "The President of the United States". 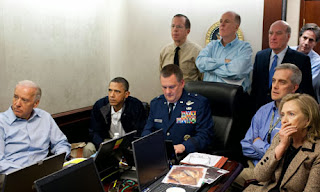 Who's the little half-Black guy sitting in the corner?


After the movie Bonnie and Clyde came out, Denver Pyle, the actor who played the lawman out get Bonnie and Clyde, was frequently harassed by hippie types who'd call him a "pig". The hippies had confused the movie with reality. A very unusual mind app had been activated there! Unfortunately for our so-called democracy, there are millions and millions of people with the same oddly child-like brains... who can vote!  This isn't saying that our votes actually matter, they probably don't, at least in the big ticket elections.  But....

The producers and directors of "America - the Movie" (especially the producers, who are the money men) have to know their audience, and what they can get away with, if they want to have a hit movie.

Most Americans will fiercely deny not knowing the difference between fakery and reality; but the producers of "America..." know better: a lot of Americans don't just want to be lied to, they DEMAND to be lied to. Many people are comforted by being told snow is black and will resent you if you tell them otherwise. As Abe Lincoln famously noted: "You can fool some of the people all of the time...."  And as Dubya Bush famously added: "And those are the ones you want to concentrate on." Hordes of gullible, movie-believing types, and God  knows how many of them there are, are determining your future. And the future is bleak.

In order to gain widespread acceptance, an idea must be more than widely propagated: it must properly packaged too. For example, certain movie roles demand certain actors. Actors who do well at playing a certain type of character fail when they go out of type. Producers and directors know this very well. An actor's look may not be right. Their voice may not be right. Their morphology may not be right.... Movie producers are very picky about things that might seem inconsequential to the rest of us. You and I know next to nothing about film editing for example, but it's highly important to the producers; as good or bad editing can make or break a movie.

A movie must also be promoted properly in order to be successful. What I'm saying is that in the movies an entire package, from top to bottom, must be assembled into a working whole if it's to be successful. At the top of this organizational pyramid is *the producer*, not the actors, who are simply paid employees.

Why not the same with politics? - which is another form of drama.
America too is a drama. At one time the political actors in America more or less freely spoke their own lines - but no more.  Can you imagine a movie where the actors freely speak their parts?  The producers can't.

Barack Obama was chosen for this role long before he ever came to the wider public's attention. His smile, his seductive, commanding baritone and presence were all carefully weighed, then accentuated by numerous coaches and trainers who were/are charged with making him believable in the role of POTUS. Unfortunately, birth certificates and Social Security numbers are sometimes revealed to be forgeries; embarrassing teleprompter fails go public - and our POTUS actor stands exposed in the glare of an ugly reality: a political puppet... who won a fixed election... in a pseudo republic....

But if Obama is only the actor in chief, who then is the director? And who is the producer? Others have taken it on themselves to unravel that mystery. See here:

The almost ritual adoration, or hatred, shown Obama by the proletariat is, in my opinion, more interesting than even the question of who is handling him. Those people who hated Bush still love Obama, even though BO is continuing all the things Bush did. And the people who loved Bush still hate Obama even though he's continuing all the things Bush did.... This, as previously mentioned, is a strange psychology indeed. People who otherwise seem sane enough will deny 2+2=4 if it conflicts with their political fancies. In fact it can go way beyond them saying "2+2=5": they'll tell you that "2+2=fudge".

What madness drives the Obamanuts? Despite the mountain ranges of evidence that they've been had they will refuse to see it. In fact they'll call you mad for pointing out that his birth certificate is a forgery. If you ask why the Guantanamo detention facility is still open they'll answer that Obama hasn't been able to close it because of republican opposition. If you point out the problems with the official 911 narrative, they'll call you a conspiracy nut - even though 911 happened on the hated Bush's watch. By rights they should have seized on that like starved pit bulls; but no, when it comes to 911 they do a weird volte-face. Why is this?

Here's why: because the producers of America - the Movie know their audience.

The producers of America... create plausible scenarios - and package them attractively - for their liberal audience (when considering things like 911 it can be seen how the packaging can be of more important than the product). Obama looks the part of a POTUS. He gets dramatic camera angles that accentuate his dark, handsome looks. The mics are strategically placed and the PA system set to exact specifications in order to make his booming baritone even more dramatic. College students are bused in to add their energy to the crowd. His "Presidency" is scripted down to the smallest detail. Even BO's occasional, humiliating teleprompter fails are probably arranged - to keep him from getting above his place.

With Obama liberals are watching a movie writ very large - with themselves portrayed as heroes. Obama really likes and cares about them! He really does! He reads them bedtime stories.  He's going to lead them to triumph over those evil corporate fascists - even though it was evil corporate fascists that put BO where he's at. It makes for a great movie. Of course there are people who would rather stay safely at the theater than have to walk back out into the cold, dark world of their other lives.

The producers of "America..." seem to believe they have discovered in the liberal's child like gullibility, and to a lesser degree the neo-conservative's, the handle by which they will gain the ultimate victory: a new world order. The liberal's hatred of anything that smacks of the old order makes him a useful ally to the producer - who hates the old order too, though for quite different reasons. The neo-con's stupidity has him doing the heavy lifting for Israel - and loving it....

I hold it as a fact that were Obama to pee in a mug in front of his followers and tell them it was beer most of them would drink it and then tell him how good it was. Leaders, even puppets like BO, will periodically do perverse stuff like that in  order to discover who isn't "on board" - and to enforce their perverse will on those who are. The unmotivated are identified and eliminated; and the leader can count on the fact that those who remain will do anything he tells them to. They drank his pee after all and liked it....

Gullible people can be convinced that snow is black - provided the argument is formatted properly. When told that snow is actually black the liberal will go to a trusted source, like MSNBC, and see what MSNBC's saying.  Of course MSNBC is saying that snow is black.  The liberal will then check another trusted source, such as Yahoo. Yahoo is saying the same thing! But what about Discover magazine?  Well, Discover magazine has a spectacular new article about how snow only appears to be white; scientists have proved it's actually black! For the liberal, such a confluence of trusted authorities seals the deal.  Snow IS black.

For liberals, more important than what's being said is who is saying it.  Ergo, they'll hate Bush and love Obama even though BO is says and does most of what Bush did.

A psychological program is at work. Liberals have been told by their trusted msm sources - who would never lie - that BO really is the savior of their self image; and that his pee is beer indeed. If someone dares to put a light to this delusion they react very defensively - as if someone had told them snow isn't black.

Generally, it's easier to get people to believe a lie than to believe the truth. Usually, people are more willing to fight for a bad cause than a good cause. And Obama's boobs would rather drink his pee, and ask for more, than admit it's not beer.