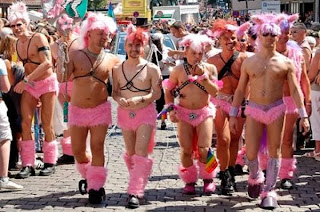 Lately, queers have taken to saying, "I'm the way God made me...." These maniacs are just laying up further torments for themselves.

The truth is God made them men and women - they made themselves queers.

It started out small enough: some occasional thoughts.... But their strange desires began to increasingly dominate their minds. They were aware of the perversity of these but continued to dwell on them anyway - to the point of obsession. Then the day came when they finally gave in to their depraved lust.... By degrees (it's always by degrees with Satan) they found themselves swimming in a (moral) cesspool.

Of course the whole world can be seen as something of a vast moral cesspool. Most people finally come to terms with it. A few here and there try to climb out. But the fags? No way! They're loving it! They're frolicking and splashing and spewing at one another like kids at a lake. Finally they're so covered with shit that it seems normal to them.

Imagine yourself going around covered in, and stinking of, shit. Imagine wearing the same shit drenched clothes day after day. Week after week. Month after month after month.... Imagine how uncomfortable that'd become after even a short time, let alone many years. What options are you left?  1. You can wash. 2. You can do like most everyone else and learn to live with it. Or 3. Like the queers you can chortle that filth is good.